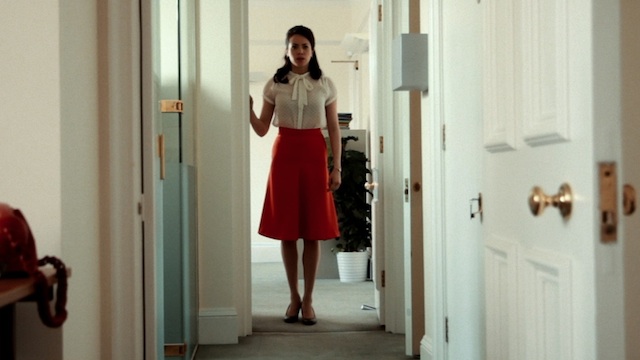 With its suave production values and Don Draper swagger, Jonathan Reid-Edwards’s Hadley TK-421 is a smart, darkly comedic ride through the modern workplace circa 1960. You know, that romanticized time when men filled out their afternoons with 2pm scotch breaks and the best and brightest were defined by the skinniness of their ties. Visual mood is often a tough thing to establish in shorts, and Hadley TK-421 nails that within its opening shots, a series of close-ups revealing an almost slavish attention to visual detail. It’s all here—from era appropriate magazines, stationery, and telephones to sleek suits with matching pocket squares. You can practically smell the cigarette smoke in the air.

But, Hadley TK-421 is more than just an impressive display of period production design.  What starts as a well made facsimile of the British 1960s workplace quickly develops into a tale of ladder-climbing office politics between two rival co-workers, eventually devolving into dark comic madness. It’s Don Draper meets Patrick Bateman—the Mad Man slowly transforming into the American Psycho.

The setting is an especially apt one. After all, the 1960s were a time of substantial contrast—a melding of archaic old world ideals with the burgeoning seeds of new technology. Nothing represents this better than the titular Hadley TK-421, a wooden beast of a copy machine that symbolizes the dawning of a new technological age comically impeded by old fashioned bulk. The future is here and it’s woefully impractical. And, so, the machine becomes a physical representation of being trapped by the weight of the corporate mechanism, a cog unable to escape from the apparatus.

While its “bad day” plot mechanisms may be well traveled ground, Reid-Edwards’s film really breaks out of convention in its final few minutes—a series of brilliantly edited sequences leading to a delightfully shocking climax. The camera work and cinematography are equally impressive. Polished, well thought out motions compliment the gorgeously lit visuals. It’s truly a wonder that the entire film was shot with a basic DSLR package all for a very modest budget.

Director Reid-Edwards is a recent graduate from the Drama Centre London, a school that is more often known for it’s acting alumni rather than its film directors. But, Reid-Edwards used his Alma mater’s theatrical pedigree to his advantage, recruiting top notch actors to star in the short. All performers—especially the two leads—consistently remind us that this is not a “student film.” And, that’s a very good thing, for Hadley TK-421 isn’t a student film—it’s a remarkably crafted period piece made by a very talented young director. In its brief runtime we are treated to a satirical tale of repression, routine, and ultimately, the absurd decisions one might make when a rung on the coporate ladder is removed, causing it all to come crashing down.