Max is a seven-year-old deaf boy growing up in the 1960s. One day he goes on a school trip to the zoo, where he sees a lion for the first time. A feeling begins to grow inside him that will change his life forever.
READ REVIEW
Next Previous 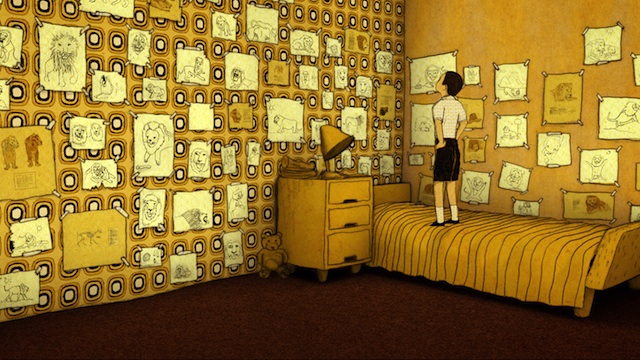 The failure to connect with his parents, or any students around him, causes a deaf boy to dive passionately into fantasy. His hearing aid causes pain, via shreiking, undifferentiated sound, so he refuses to wear it. Perhaps excited by her son’s rare eagerness to engage after a trip to the zoo,  the mom sews the boy a lion’s outfit. But, once donned, the boy refuses to transform back.

The Boy Who Wanted to Be a Lion can be a humorous film, and its yellow-palette world is undeniably gorgeous, but it has a melancholy core. Sam, my curation partner at Vimeo, noted that the film works as an ode to Maurice Sendak and “Where the Wild Things Are”, and I think it was deliberate on director Alois Di Leo’s part. Distanced from his family, our boy puts on a costume to run away and become the “king of the jungle”, or, in other words, the king of wild things. But this is not a fantasy, instead Di Leo aims for a more naturalistic mode, whose realism is reflected in the detail of his drawing. And so, instead of the rejuvenation and growth Sendak’s Max experiences, our young protagonist confronts the horror of one particularly famous Sendak line.

There is much to admire from director Alois Di Leo’s 2010 graduation animation, from the 1960’s setting, the mix of techniques, to the bravery of its storytelling, so I was surprised that the film itself was unknown to me until it surfaced online this week. Di Leo is from South America where he founded a company called Sinlogo, but attended the National Film and Television School in England, the same school Joseph Pierce attended,  and the film was very well-received at festivals a couple of years back, including a very prestigious placement at Cannes Critic’s Week that year. So, I suppose I should have known about the film ahead of time,  but either way, I know about it now, and I hope you’ll help me in making sure that many many more people learn about this subtle, beautiful work.