A piano tuner pretends to be blind for simple thrills until he sees something he shouldn't in this well-crafted French thriller.
READ REVIEW
Next Previous 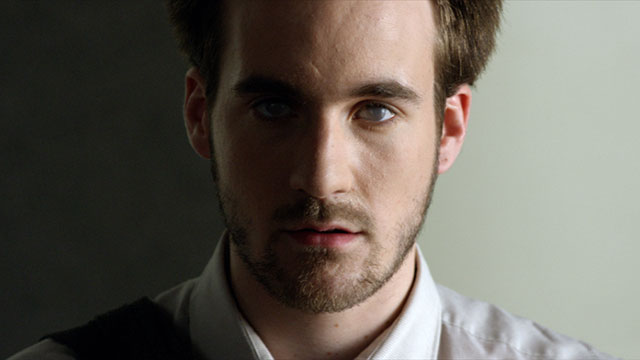 Some premises are just brilliant—with just a simple pitch you’re hooked. Such is the case with Olivier Treiner’s ingenious short thriller, The Piano Tuner (L’accordeur). A young man—in this case a disgraced musical prodigy come piano tuner—pretends to be blind. What starts somewhat innocently slowly develops into something more off kilter, a voyeuristic existence where those being watched can readily see their watcher, unaware of his true facilities. This leads to the film’s gripping narrative hook, the kind of thing you’d see in bold letters on the bottom of a movie poster: if you’re supposed to be blind but can actually see, what if you see something that you shouldn’t?

But, Treiner’s film is more than just a great concept. It’s also incredibly well executed, tightly scripted and perfectly paced. The Piano Tuner deceptively transforms from intriguing premise to smartly crafted thriller in an admirable, almost Hitchcockian, style. In what could have easily provided enough engaging content for a feature narrative, the film relates an entire range of character development and emotions in thirteen short minutes, from depression, to humor, to sensuality, and ultimately, suspense. All of this is supplemented by our main character’s occupation as a piano tuner. His aural profession provides a perfect contrast to his supposed disability, his acutely developed ear functioning as counterbalance to what he “lacks.” In service to the plot, it also allows him access to the homes of several people, a silent witness to that which he should be unable to see.

All of this drama is accompanied by—what else—a classical piano score. Simple and oddly suspenseful, the beautiful piano notes are far more effective than your standard, hackneyed suspense drones. Being that the majority of the music is diegetic, the suspense builds naturally, never feeling manipulative. Visually, the film looks sharp, filled with beautiful, moody cinematography, as well as playful visual quirks that are just understated enough to not be distracting. The magnification of our main character’s eye as he peers through a fishbowl is one such example, highlighting the film’s constant use of both the visual and auditory senses as a cinematic leitmotif. If I have a minor structural complaint, it’s that I wish the film cut out its first 50 seconds, which provides an unnecessary preview to the wonderfully creepy, deliciously ambiguous climax.

Minor quibbles aside, Treiner has crafted a true sensory experience, expertly supported by assured direction and solid acting. The film, which has played at several major festivals, has yet to find many viewers online. That’s a shame, as the Piano Tuner manages to succeed in the one department where so many online shorts fail—a strong, well-written story. This is definitely worth mentioning, for rarely do visuals, mood, and plot come together on such a pitch perfect note.