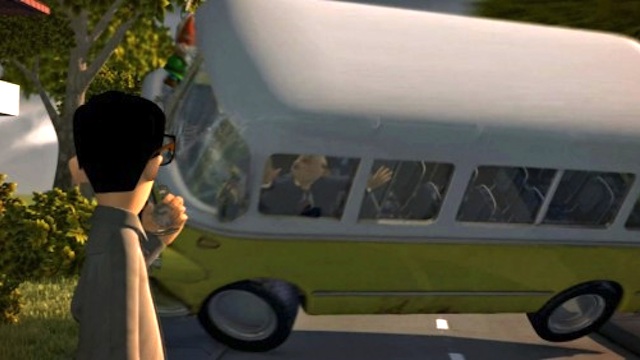 The French student film Destiny starts out innocuous enough. Average Joe wakes up to his alarm clock, makes a bit of breakfast, and heads out the door. Then—WHAM—normalcy fades and all hell breaks loose. The result? It’s Groundhog’s Day via Pixar–a time bending, frantic journey where our hero must save himself all while navigating the space time continuum.

And, what a polished journey it is! From smartly created environments to strong character animations, Destiny is truly is a pleasure to watch. Little visual quirks and subtle details pack each frame. Morning light creeps into every environment, creating a comfortable, warm color palette. But, considering the lofty pedigree of French animation nowadays, it’s almost hard to get impressed by sheer eye candy. Beyond the technical expertise on display here, Destiny is especially notable because it’s paced so brilliantly. Starting slow, the film’s action unfolds like a roller coasting descending a hill. The ride isn’t out of control—it just feels like it is. As the momentum builds—the narrative’s inertia pushing the story forward—we find ourselves completely immersed in the chaos, a frenetic race  to the finish that propels our protagonist’s actions as much as it keeps us glued to our screens. It isn’t until we reach the end credits—the coaster train hitting the brake run—that we are finally given a chance to breath.

A collaboration between a team of students from Bellecour, Destiny is storytelling at its most skillful.  The film is dealing with complicated plot mechanics, but the narrative feels effortless. Never are we confused, even as the film’s events begins to layer upon themselves. It’s a multiple reality, time traveling suburban adventure that is funny, clever, and also, amazingly suspenseful.  That’s a rare combination, as it’s often so easy to let technical proficiency and aesthetic overshadow plot.  Here, it feels like both were given the time they deserve.