A young boy is thrust into the terrorizing world of daycare.
READ REVIEW
Next Previous 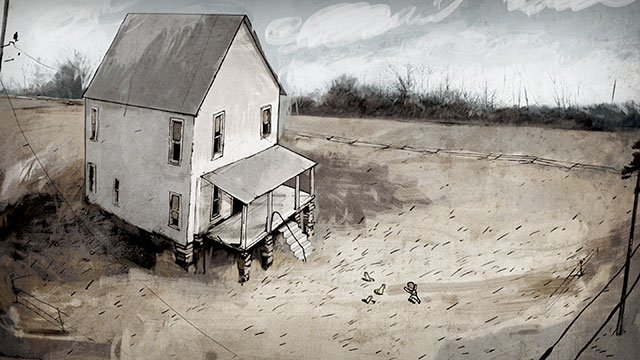 Winner of the top student prize at Ottawa last year, The Renter tells an autobiographical story of a young boy thrust into the terror of daycare. He finds himself in the care of a ratchety, old lady who rents out rooms to strangers and decapitates chickens for ad-hoc soup. Though the story itself may not be the wildest, it certainly is honest.

Jason’s scratchy, textural animation was all done digitally. Yet it’s no less handcrafted and painstakingly considered than if it were done completely analog. Every frame shows detail of his thoughtfulness—be it the rough overlay textures, or the attention to lighting. The film’s movement is top-notch with a great sequence of shots at both the beginning and the end.

The Renter began as an unfinished student project from CalArts and stayed that way for a couple years until Jason later remade into the visually captivating story it is today. The film has spent the past two years touring the world screening at nearly every big and mid-sized animation festival there is—from Stuttgart to Ottawa (I first caught the it at the Savannah Film Festival).

Become a fan of animator Jason Carpenter by following him on Facebook.