Prole 514 dreams about winning the Great Lottery. The lottery winner is transformed and allowed admission into the elite White society, where everyone is beautiful, young and happy. A vicious dystopian vision from Poland.
READ REVIEW
Next Previous 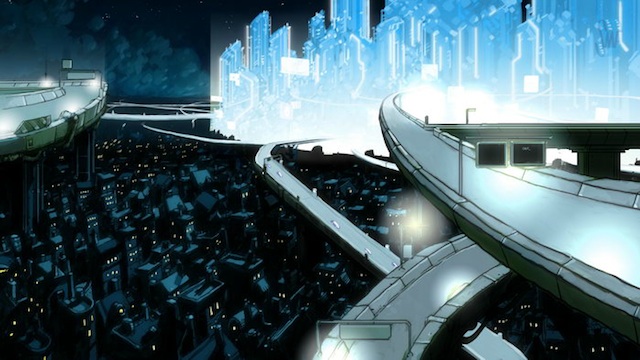 While the cartoony style can be a bit off-putting, Lucky Day Forever is definitely a mature film. Both in its barely concealed sexual content, but also in its confident storytelling. A devastating indictment of modern consumerist culture viewed through the lens of class, the film envisions an alternate world that, like all good sci-fi, eerily resembles our own.

On the wrong side of a rigid class system, Prole 514 suffers the ignominy of working directly in the presence of the “B’s”, ethereal beings who possess the riches of the world. Beautiful, young, happy, but vacant, tawdry and obsessed with sex, these beings are the logical endpoint of an MTV-culture extolling us to be thinner, sexier and more fun. For the proles there is no upward mobility through merit, their  hopes are contingent upon winning the “Great Lottery”, an endlessly hyped event which allows ascendence to this privileged class.

Prole 514, miserable as he is—friendless, joyless, taking pleasure only in beer and lottery tickets—may have found something, or someone, to create joy in his life however. He spots a neighbor, a young woman, abused in her relationship, and through shy, fleeting eye contact, they make a connection. That nascent connection is challenged by the Great Lottery, but is the celebrated transformation it promises what it seems to be?

With its unconcealed racial metaphors, and crude language and visuals, the film is the opposite of subtle. Despite, or perhaps because of a lack of sensitivity to such issues however the film is uncompromisingly angry and thus, powerful. It is a dark vision that Wasilewski paints for us, which makes for a film that is impossible to turn away from.