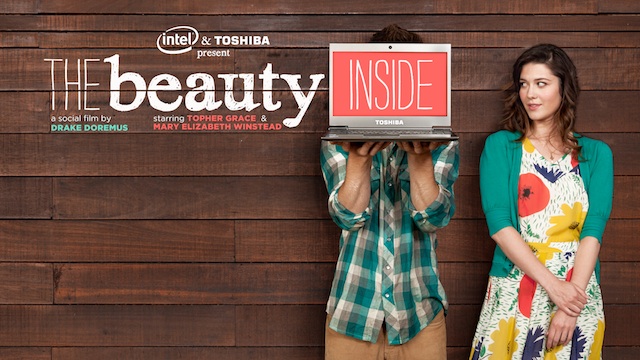 The first act of an ongoing series, The Beauty Inside, has premiered today on Facebook and YouTube. I know, a series on SotW? We’re giving it attention however due to our on-going fascination with the evolution of Branded Content, and because it has crazy talented people involved. Director Drake Doremus, AFI Grad and famous for writing and directing the feature Like Crazy, has partnered with Toshiba/Intel to create a narrative series that promotes the laptop brand. Actor Topher Grace, from That 70’s Show, is the consistent voice of the main character, Alex. Mary Elizabeth Winstead, from Scott Pilgrim vs. the World and a pair of pretty excellent recent shorts in Cost of Living and Magnificat, will play Alex’s only consistant love interest.

This first episode plays like the first act of a film. We are introduced to Alex and his problem, which is the focus of the series. The structure of this first installment is voice over followed by illustrative shots. The handheld camera adds a sense of perspective. We are being guided through this world by Alex. The short is beautifully shot and heart-breaking at times (especially when he wakes up as a old man). Alex explains that his predicament prevents him from having any companionship. However, he does acknowledge the fun his condition affords him. Role playing at bars is the highlight of his social life. Problem being that type of existence is getting old, quick.

This storyline keenly pinpoints and increasing truth for its target demographic. A generation of people are discovering their identity through their twenties. Technology plays a part by allowing people to record video diaries and upload them to YouTube for anyone to watch, and part of that process is trying different clothes, jobs, partners. Eventually, a decision needs to be made on a particular style, career, spouse. Alex is the fantastic embodiment of this generation’s journey of self discovery.

Toshiba is taking an interesting marketing perspective. They are creating this series to engage with their core audience in hopes to capture their hearts and minds, eventually their consumer loyalty. Using narrative media to hook an audience is not uncommon. In fact, we could argue that this technique has been used since the dawn of television. Could I Love Lucy or The Twilight Zone be made without the help of Colgate or Lucky Cigarettes? Toshiba is taking this idea and pushing it forward into the 21st century using interactive platforms to help the audience participate in the story.

Alex left us last week explaining his temporary body possesion. The one detail left out of last week’s review was the details. Doremus does a good job at allowing his audience to examine what a day in Alex’s life is actually like. A great moment is when Alex measures his feet with a foot ruler to find out what size of shoe he is that day. The enormous wall of closets in his room are to accommodate any age or gender he may possess. These elements of production design sell the fact that Alex has made his condition a part of his life.

This week’s episode introduces us to Leah, (Mary Elizabeth Winstead) Alex’s love interest. Leah has a similar job to Alex. She works in an antique shop, knowledgeable about art history, and passionate about what she does for a living. Alex is first introduced to her as an older man, past the age where he could easily be in a relationship with her. They have a conversation over a chair. Briefly, they exist in a bubble that only they understand. Alex then wonders to himself why he never noticed her before in a shop where he has been a hundred times.

So far, I am intrigued over this idea. Where is Drake Doremus going with this character? I am beginning to suspect Doremus may be using a narrative technique that was used by Todd Solondz in the feature film Palindromes. Solondz cast several different actresses to play the same character to illustrate how the character was feeling in each scene. I believe that Doremus is attempting the same technique, however taking the idea a step further to make it a part of the story. In the beginning of this segment, Alex is at the doctor’s office. He is a young twenty-something woman. Sitting on the examination table, he appears to be vulnerable and meak. Later we see Alex in the antique shop as an older, mature man. Here, Alex fits his surroundings like a puzzle piece. Last week, Alex woke up in one woman’s bed as a frail elderly man. The look of terror on his face spoke of a person whose routine of casual encounters is no less anxious and out of place every time.

The marketing hook is in the laptop recordings from the audience. Intel is giving viewers an opportunity to participate by recording their own “Alex” stories to be included in the fictional narrative. This week we had a man explain how he finally snuck into Dodger’s stadium and ate a hot dog on the pitcher’s mound. How will these recordings fit into the larger theme of the story?

The thesis of this series is still unclear. We are still in the first act! My mind is reeling over how this story will unfold. Will Alex still be attracted to Leah as a young teenage girl? Who was Alex? How long has he been living this way? The first episode briefly clues the audience by Alex’s voice over explaining that he couldn’t remember a time when he did not have this condition. Segments of this story could trail off into deeper meditations on identity and the concept that love conquers gender, race, and creed. Come back next week to see how Alex and Leah progress!

This week Alex and Leah have their first, and perhaps their only, date. Matthew Gray Gubler (500 Days of Summer, Criminal Minds) stars as Alex. The episode starts with Alex explaining that he needs to wait for the right moment to ask Leah on a date. His perspective considers his appearance as the key to make the right connection with Leah. Webcam footage from the audience aids the story in this week’s episode by acting as Alex cycling through several forms until he lands on an attractive male body.

Alex, in Gubler’s body, finally has the courage to ask Leah on a date. When Leah tries to blow him off, Alex stresses that the date needs to be that evening. The urgency of his request turns her off. Just as she pulls away, Alex dazzles her with a romantic story about roses and furniture. Their mutual love of antiques pulls her back into the conversation. Their date is a night tour through a natural history museum told in a melodramatic montage then concludes on a bittersweet note. Just as they kiss goodnight, Alex promises Leah that he will see her again. The audience knows that Leah will not.

The theme of this week’s chapter is timing. In Alex’s case, good timing is when he lands the right body that he believes will attract Leah the most. Surprisingly, Leah is attracted to Alex’s story more than his boyish charms. This encourages the audience to believe that there could be a solution to Alex’s loneliness. Will Alex have the courage to include Leah in his life? The audience participation is woven well into this portion of the story. I was amused by the different likenesses of Alex, in particular the silent version. Again, Doremus is playing with the unpredictability of the condition. I wonder how much of that is the audience and how much is written/requested? This week has a somber feeling on two levels. One, Gubler and Winstead have great chemistry. The final scene between them is honest and emotional. Both actors have a grasp on using emotion in subtle ways. They sell the exhilaration and terror of a first date. There is a supplemental video of Gubler, talking as Alex on his feelings regarding the date. Two, the audience knows that this first date will only exist in a brief wrinkle of time. The heartbreaking thing is that Alex registers this on his face as Leah walk away.
YouTube Facebook
LIKE TWEET