The LEGO Group celebrates its 80th Birthday with an animated look back at its origins and history. An unusually ambitious and blatant branded film.
READ REVIEW
Next Previous 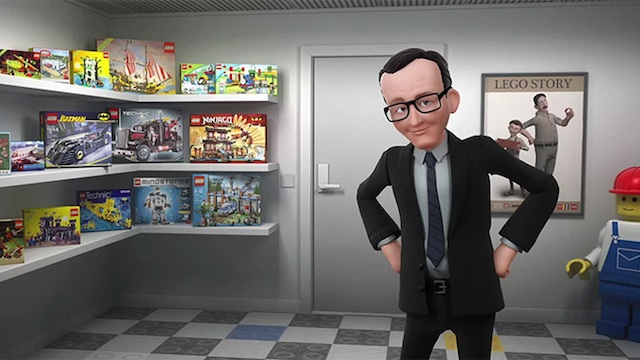 Lego, the beloved toy manufacturer, is not a stranger to branded content. Its YouTube channel is a maze of sub-accounts featuring videogame crossovers, product unveilings, user-submitted “brick” films and yes, themed shorts. There is a lot to dig into and a lot of cumulative views, but considering that the brand has 2M Facebook fans to direct towards content, it’s surprising that they’ve yet to ever have something go truly viral.

The brand’s previous best efforts were the innovative “Cl!ck” pixelated films. Lovely pieces, but at 1.5M views apiece, still somewhat uninspiring performance-wise for a company of Lego’s social clout. However, with yesterday’s release of The LEGO® Story quickly receiving 400K views and several prominent writeups, the brand may have produced something with the legs to make a major splash. The surprise? It’s a 17 minute film.

The LEGO® Story, is a classic creation myth. Starting with the founder Ole Kirk Christiansen, the film, animated in a very gentle Pixar-esque sort of way, tells of Lego’s beginnings and the trials and setbacks presented on its way to success.

This is actually a common strategy in this realm, called a Brand Story. We featured an excellent one a couple of months back call The Forty Story. Brand Stories educate and humanize a brand, as well as providing ample opportunity to “storify” core brand philosophies. For example, it is currently a trend in the culture to celebrate the concept of “craftsmanship”, a mastery of one’s chosen domain and an intense pride in one’s attention to detail and pursuit of improvement. How does craftsmanship fit into a story about Lego, a product comprising of little bits of mass-produced plastic? Modern Lego is modern manufacturing at its finest, but this concept isn’t sexy. So instead the film takes great pains to interweave concepts of craftsmanship into the story of Lego. Gotfredt, Ole’s son, tries to save money by using only two coats of laquer. Ole must educate the boy, telling him “every detail matters” and “only the best is good enough”.

In addition to craftsmanship, such virtues as family, entrepreneurship, and perseverance are prominently displayed in the film. The problem? Much of the copy sounds like it was adopted straight out of the marketing department. Complete with corny narration, The LEGO® Story forgets a key component of a Brand Story, something more traditional advertising would never forget, which is attitude. Sincere, but humorless, The LEGO® Story can be fairly bland. However given its target consumer demographic, perhaps that is a calculated choice. For those of you that may have outgrown playing with your Lego’s I’m curious as to your take; is the film an interesting narrative in and of itself? Did you like it for personal, nostalgic reasons? Or does its edges cut-off approach to brand historiography leave you wanting?