The Johnsons are an attractive, upper-middle class family with a perverse little secret. Ari Aster directs, this dark satire of the domestic melodrama.
READ REVIEW
Next Previous 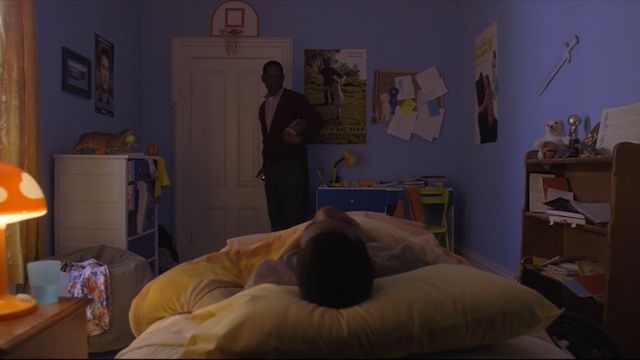 It’s no secret that polarizing things tend to garner attention. Nothing is more boring or milquetoast than that which strives to be middle of the road. Ask any fame seeker, abject hatred is preferable to agreeable mediocrity. For that reason alone, it’s no surprise that Ari Aster’s The Strange Thing About the Johnsons has received so much attention. Take a quick perusal of  the video’s comments on YouTube and you’ll find everything from effusive acclaim to disgusted vitriol. In terms of the internet, that means it’s a hit.

Without spoiling too many plot details, the film revolves around a taboo relationship between a father and son in a seemingly normal suburban family.  Well, actually, taboo may not be the right word, for in order for something to socially unacceptable, it needs to be somewhat fathomable. In The Strange Thing About the Johnsons, Aster has constructed a situation so absurd, so perverse that it’s practically comical, almost as if he is daring the audience to accept his twisted tale. But, this contrast–the comically absurd versus the deeply dramatic–is what makes the film so special. The film manages to carry heavy loads of both emotional gravity and dark humor, yet never collapses under the weight of either.

The performances are especially strong. All the major roles are played with a surprising amount of range and skill. For the character of the son, Aster cast his good friend, Brandon Greenhouse, whose portrayal is both disturbing, but also, surprisingly, sad. He’s not a villain. Reprehensible, maybe, but not purely evil. A special mention should also be given to Angela Bullock, who plays the family’s mother.  With her character’s lack of action–her desire to maintain the facade of normalcy–slowly we begin to realize that she may, in fact, be the most twisted character of them all.

Although the film features an all black cast, the movie is, for all intents and purposes, colorblind. Aster isn’t making a point about the African American experience (considering he is a white director, that would be disingenuous). In fact, perhaps the most intriguing thing about the film’s approach to race is how it doesn’t deal with it much at all. Instead, Aster has created a heightened, visceral dissection of the seedy, suburban underbelly. It’s about the unspeakable actions that occur in the dark rooms hidden behind the white picket fences. Here, the film is undeniably reminiscent of indie director Todd Solondz’s work–the rare type of narrative that satirizes the conventions of melodrama while also embracing them. The substantive content is complemented by the short’s high production values. The film was shot on 35mm, instantly indoctrinating the picture with that “real” movie feel. Lighting is dramatic–almost nightmarish. With certain scenes, Aster’s direction is reminiscent of a well-crafted horror movie, dimly lit rooms with heavy shadows and meticulously chosen light sources.

If there is a criticism, it circles back to the film’s blatantly risqué subject matter. Despite the movie’s strengths, one has to ask if Aster manufactured his scenario simply to elicit attention, rather than resonance. After all, as the vapid nature of celebrity scandal indicates, controversy is easy, high-minded content is not.  But, I’m not that cynical. I think Aster’s picture is about more than just shocking its audience to attention. Sometimes in order to understand the nature of humanity, one has to delve into its dark recesses, plunging into that which is so perverse that eventually we come out the other side with a better understanding of what makes us good to begin with. Regardless, love it or hate it, I can guarantee that when you watch The Strange Thing About the Johnsons you won’t be able to look away.