The greatest 80s movie never made, a talented production team from Tulsa, Oklahoma, brings Pac-Man to life in this fun fan film.
READ REVIEW
Next Previous 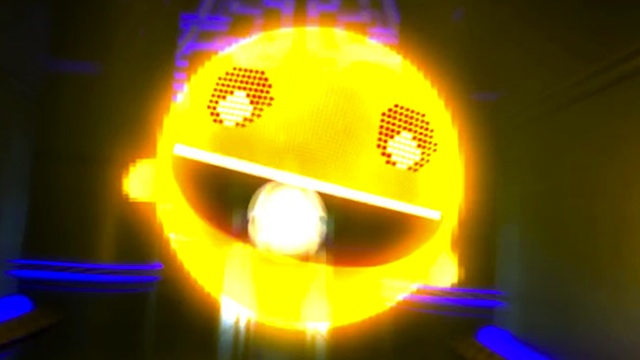 If this summer’s release of Battleship was any indication, when it comes to Hollywood, nothing is sacred. As guys in fancy suits are surely quick to attest, brand recognition is good, nostalgia is profitable. So, when I found out that a short film had been made about Pac-Man–you know that classic Namco arcade game about a yellow dot that eats stuff–I barely raised an eyebrow. Of course that’s been made! Big surprise! Well, after watching the film, I can assure you that it truly is a surprise, mainly because it’s actually good.

Being tagged as the greatest 80’s movie never made, Pac-Man: The Movie is 6 minutes of compelling action combined with imagination and style.  In a clever premise, the film manages to address what is seemingly impossible: “How does Pac-Man exist in a live action world?”  The movie’s answer isn’t necessarily realistic, but it does set-up a fun pseudo-reality for our digital protagonist to play in. The film reimagines classic gaming conventions within a futuristic testing ground, providing just enough world building minutiae to where you actually buy into the fantasy.

With its tongue planted firmly in cheek, Pac-Man manages to hit the tonal sweet-spot for a movie about a yellow sphere that eats white dots and pixellated cherries. It’s serious enough to be engaging, silly enough to keep us smiling.  References to the game are always smart, never cloying.  While I hearkened earlier to the cynicism of a Hollywood that wants literally to turn anything recognizable into a movie, Pac-Man’s fan-film roots make the whole process seem so much more pure.  After all, the team behind the film, a Tulsa, Oklahoma boutique video production house, are clearly fans first, not sleazy miners of childhood remembrance. For Steelehouse Productions, this is about bringing a ridiculous concept to credible life. And, they do so with aplomb. The short moves quickly and the computer generated action sequences are genuinely thrilling.

But, beyond the fun, cartoon action, the film, unwittingly, is representative of a particular facet of today’s media savvy culture. I like to moniker it  the “Kirby Ferguson Everything is a Remix philosophy.”  It seems that all creative content today–more so than ever–is built on what came before it: everything old is new, everything new is spawned from something old. When viewed from this perspective, the notion of creation from nostalgia may actually be a positive idea, not as soulless or nefarious as one might think.  Talented filmmakers and creatives are able to pull from all aspects of our common culture, to build, re-build, mold, and ultimately, output content that redefines as much as it emulates. Movies like Pac-Man are just the beginning, and, frankly, for us short film lovers, that’s a very good thing.