Lowland is a teenage girl temporarily living in the middle-of-nowhere Ireland while her father is on an archaeological dig. When she happens across two young brothers cutting peat in a bog, a surprise discovery brings the three of them together for a night of exploration
READ REVIEW
Next Previous 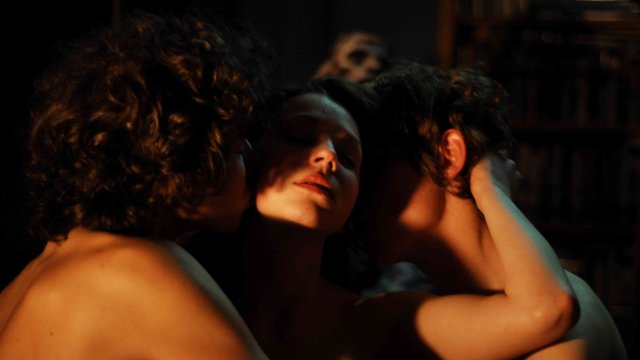 Director Michael Kinirons’ short, award winner Lowland Fell (SIFF 2009 Special Jury Prize, Best Cinematography 2009 Novara Film Festival), is an interesting study of exploration and human curiosity. The rhythmic heart of the story begins with the main character, Lowland, examining a wasp. As the wasp climbs into a jar of honey, drinking the sweet sap, the solitary insect slowly realizes that footing is lost. Lowland is mesmerized by this event, ignoring her father as he leaves for work. Her gaze upon the creature is a combination of fascination and apathy. She is intrigued by the wasp’s predicament however she is paralyzed to intervene, like a car crash or an explosion. This portrait of the human condition is echoed throughout the film.

The action of this story begins as Lowland explores the bog area of remote Ireland on her scooter. Her destination and purpose are unknown. In her travels, she stumbles upon two brothers who are gathering peet in the bog. She asks for directions and then heads off on her way. Just as she drives down a path, something mysterious happens to Lowland. After a few viewings, I still cannot quite put my finger on what causes her to fall off her scooter. Her rolling eyes suggests that she fainted. Later narrative details could suggest that a spirit pulled her into the bog. Maybe she thought the boys were cute which caused a flush of adrenaline. Regardless of the reason, Lowland falls into a hole filled with water to discover a treasure only an archaeologist would appreciate.

Lowland accepts the boys’ offer to eat dinner at their cottage. They enjoy a feast of canned vegetables, preserved peaches, and whisky. In the canopy of darkness and haze of alcohol, Lowland breaks the tension their young sexuality has created. She finds a record of rhythmic drums and dances seductively by firelight. Three teenagers strip their inhibitions and give into their most basic instincts, exploring the possibilities of a night without rules or supervision. Sunlight reveals the story of the deviant behavior from the night before. Lowland gathers her belongings and returns the stolen item to the bog, leaving her male companions behind.

Kinirons has crafted a story that deals with overall theme of exploration. Most obviously, the portrayal of Lowland’s father is a clear indication of the filmmaker’s intention. The age of the main characters also comes into play. Teenage years are about discovery and investigation with sex and identity. Finally, the discovery of the item in the bog. Curiosity of this item brings the three together in a way that triumphed the typical awkward shyness of adolescence. In the end, Lowland’s trip back to the bog was her own realization that maybe somethings should not be unearthed.