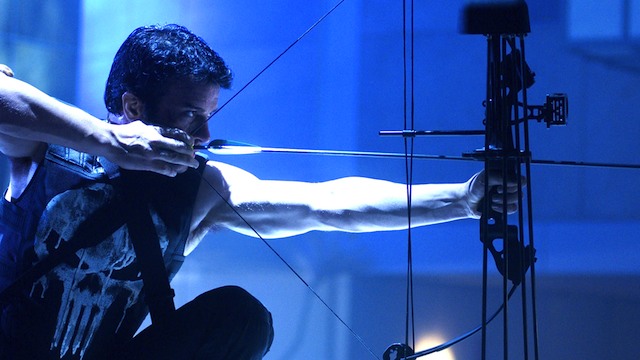 In the aftermath of Marvel’s astounding commercial and critical success with The Avengers, it’s easy to forget that not all of the comic book company’s beloved properties have been treated with such reverence. Before the rise of Marvel Studios as a legitimate filmmaking force, let’s just say that there were more than a few stinkers: Elektra, Daredevil, Fantastic Four…the list goes on and on.  Then, there’s the curious case of The Punisher, a character who has been adapted for the silver screen a total of three times. You read that right–three times! Starting with the 1989 schlock fest featuring Dolph “Ivan Drago” Lundgren and culminating more recently with the 2008 “so-bad-its-good” Punisher: Warzone, the Punisher’s relationship with Hollywood has been tumultuous to say the least. But, quality of the films aside, for a mid-level Marvel character, the Punisher sure does get a lot of theatrical attention.

Enter from stage right the new short fan-film, Dirty Laundry, which premiered just a few days ago at San Diego Comic Con. When it came to the treatment of the Punisher property, like the vigilante Frank Castle himself, actor Thomas Jane decided to take matters into his own hands.  Jane, who was the star of Hollywood’s astoundingly mediocre 2004 Punisher effort, seems to be operating under the classic aphorism “if you want something done right, you’ve got to do it yourself.”  Without the weight of studio interference, Jane and a team of creative individuals have crafted a 10 minute YouTube love letter to the character. That is, if love letters typically include splintered bones and splattery headshots. Two days and half a million views later, I’d say that the whole thing has been a bloody success.

Dirty Laundry is interesting for a variety of reasons. For one, it proves that fan films aren’t just for crazed geeks running around with their home video cameras anymore. Jane’s involvement shows that mega Hollywood actors are getting into the game as well.  The internet levels the playing field–fanboy and heartthrob alike now have equal opportunity to create and distribute content directly to a desired fanbase. Who needs a three picture deal when you have millions of views in a couple of hours?

But, how’s the movie itself? Well, to put it simply, it’s pretty good. That may seem like lukewarm praise, but when it comes to Punisher adaptations, that’s practically a godsend. The story is incredibly thin and cliche (generic thugs get their comeuppance), but the production value is top notch, and, the climatic fight scene is brutal (if over-the-top). My issues with the film have less to do with the movie and more to do with the Punisher  himself.  While I realize Frank Castle has a practically religious following among the comic collecting set, essentially he’s a very thin character–a less complex Batman who substitutes theatrics for heavy artillery. Ultimately, it’s a property that relishes more in the depiction of violence rather than motivations behind it, and frankly, that doesn’t interest me.

Oddly, though, this has less to do with whether or not the film is any good and more about the state of the industry itself. Big studios can’t do it right? No worries! I’ll just do it myself. That’s a powerful mindset that is going to continue to grow over time. Charlie Kaufman’s proposed Kickstarter project Anomalisa is one such example, and we’re bound to see other filmmakers follow suit. Backed by Thomas Jane’s celebrity persona and rabid fanboy attention on the internet, Dirty Laundry is going to turn some heads. Heck, you never know, we might even see a new Punisher film hit theaters. After all, it’s not like they can get any worse.