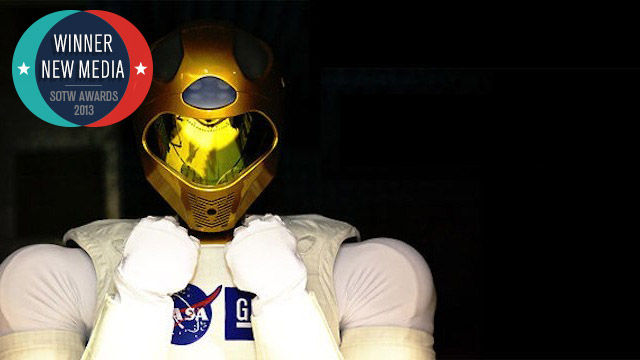 2032. That was the year Robbie became self-aware, but no “SkyNet” dystopian future followed. Robbie is nice. He enjoys being helpful. He is good friends with the human astronauts, and became a practicing Catholic. Robbie has a fascination and affinity for humankind, but is not one of us, making him an excellent narrator for humanity’s fall.

Robbie is a brilliant short film from Australia’s Neil Harvey. Created entirely of NASA archival footage, Harvey, through editing and the writing of Robbie’s monologue, constructs a touching, powerfully elegiac narrative around his robot main character, one which, in true sci-fi fashion, transverse boundaries of human nature, and vast amounts of time. We see and hear of the world through Robbie’s eyes and his voice, the film investing itself in robot subjectivity to a truly novel degree.

The monotone delivery of dialogue and the slow unfolding of Robbie’s memory and experiences dovetail with that elegiac plotting, creating a sweet, but mournful look at what has been, far more effective than the obvious mainstream example, Spielberg’s ambitious but deeply flawed, A.I. The found footage creates that extra level of intimacy that an original, VFX piece would not have attained. It is a well known principle of course, born from short films, and which eventually made its way to the big screen in films like Cloverfield and Paranormal Activity, that the verisimilitude of amateurish footage can deepen audience engagement, and once again that principle is proven to be powerful in this piece.

The warmth and heart of the film, can be perhaps credited to its genesis. An anniversary gift to his wife, Harvey views the film as philosophical and, hopefully cathartic, rather than tragic, using the vehicle of artificial intelligence, to grapple with the meaning of love, life and, ultimately, death. Striking a unique tone, in an absolutely unique way, Robbie is one of the most fascinating and enjoyable short films in a long while.