Four sassy cougars enjoy the thrill of a chase in this action-packed short that doesn't take itself too seriously.
READ REVIEW
Next Previous 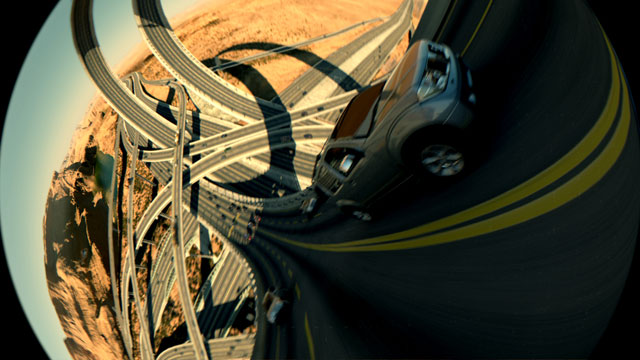 Four women weave in and out of traffic with the entire police squad and a few choppers on their tail. In fact, these women are gleefully setting traps for the cops almost as if this high speed pursuit is no more than a childish game. Director Philippe Gamer delivers a short that plays with your expectations in the same way his main characters toy with their pursuers.

At first glance, The Chase looks like a cinematic sequence from a high-end console game. Everything is exaggerated and polished. Extreme camera angles give the audience a view of the city streets that could only be possible in 3D computer generated space. The women are stylish and sassy. Their glossy veneer and cartoonish faces hint that the world they live in does not exist in any setting on earth, except in some young man’s head. The sheer volume of cops is the most obvious clue that the short should not be taken seriously.

The suspects’ crime is never explained. Although, it leaves us guessing. With the entire city police department furiously tailing the female suspects, they must be guilty of something more than blowing a stop sign, right? The women are chatting back and forth as if this is a typical day of lawlessness. They position themselves in a plotted pattern of attack just to create and witness piles of motor vehicles around them.

Thrill is their sole reason for mass destruction.

Even though the world is ridiculous, moments of reality make this film viral. Just when the audience suspects that gravity will be cheated or good guys will catch up, the director throws a curve ball. The best part about this film is the ending. It feels like the punchline to a well timed joke, exactly how comedy shorts should be structured. In just over four minutes, The Chase is a thrill ride that will leave a smile on your face.