Living in an average British suburb, Barney drives an average car to an average office where he works an average job. He's an average bloke, with one important exception: he lives life upside down.
READ REVIEW
Next Previous 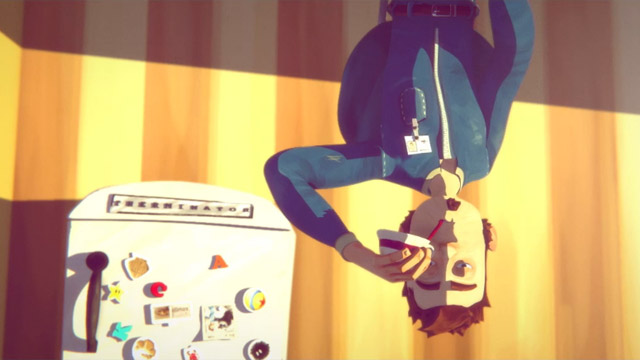 On a technical level, Reverso gets everything right—quality 3D animation, realistic lighting, and complex yet easy-on-the-eye rendering. Yet in today’s democracy of filmmaking, technical ability isn’t enough to stand out from the crowd. What makes this film special is its bold visual storytelling.

Reverso is a masterclass in how to tell a story without dialogue. Strong characters and visual cues are used to establish viewer expectations, build the conflict, and draw the story to an inevitable conclusion that despite its sadness, is also uplifting (both literally and figuratively).

The filmmakers devoted careful thought to establishing characters through visuals. Barney, the lovable protagonist who navigates his upside-down world with a cheeky smile, and moves his too-long limps with lolloping grace, is based on a chimpanzee. Barney’s Dad, a soft, kind, maternal man has the rounded belly of a greedy gorilla, and spends his whole life wearing pink slippers. The office bully, Humphrey, is petty and mean, with the ugly face and sharp features of a rodent.

In its visual-only storytelling, its choice of office setting, and its thematic focus on difference, Reverso is reminiscent of the Jaime Maestro animation FriendSheep.

Reverso is a playful story with a serious message. Launched as part of the ArtFx school’s 2012 promotion, this is the first animation featured on Short of the Week from the Montpelier-based school of special effects and 3D animation. If it’s a sign of what’s to come from ArtFx, I’m excited to see more.