Friends meet at the crossroads of loyalty and morality and are forced to decide which path to walk.
READ REVIEW
Next Previous 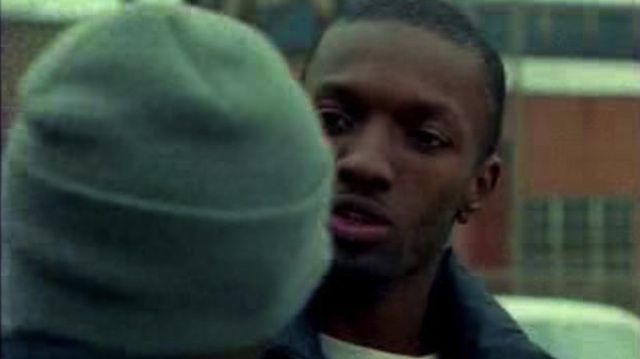 Jason B. Kohl
It is rare that circumstances conspire to give young actors and filmmakers a viable career based on a short film. Five Deep Breaths is one of them. After its premiere at the 2003 Sundance Film Festival, Director Seith Mann launched an impressive career in television, including turns at directing Entourage, Nurse Jackie, Sons of Anarchy and, last but not least, The Wire. It is still rarer that a short film serves as a breakout performance for an actor. In this case it was the understated brilliance of star Jamie Hector, soon to be featured on The Wire as the unforgettable Marlo Stanfield.
Five Deep Breaths, as its title implies, is a study in suspense. Two friends, Banny and Mark (Hector) accompany a battered female friend to pick up her belongings at her abusive boyfriend’s apartment. Banny is incensed by the beating she received and his own feelings of impotence, swears vengeance. Mark is dubious, he knows that the abusive boyfriend owns a gun. When Banny riles up a gang of friends to go teach the man a lesson, tensions boil to a surprising reveal.
It’s a classic loss of innocence tale. The prologue, consisting of shots of Banny and Mark after their high school graduation, does a very nice job of establishing the key relationship and character empathy that drives the film.  The film shows how a mob mentality can quickly rewrite history, and how ultimately unsure we are of what happens in another couple’s relationship.
The film’s performances, and the editing that supports them, are first rate. We are always where we need to be as information bounces off each of the characters’ faces in the spiral toward a gripping confrontation. Sound design plays a subtle role as well; listen for the slight buzzing throughout the confrontation scene.
This is definitely a Sundance aesthetic, but it makes use of solid plotting and character development along the way. These films always seem deceptively simple; grab some actors and a handheld camera, then have them yell at each other. The difference between this and the thousands of handheld student films lobbed at the walls of Sundance every year is its incredible ability to build and sustain tension, its strong character development, and stellar performances.  No wonder David Simon took note. Let’s just hope that there’s a few more visionary showrunners out there willing to watch short films.
Vimeo
LIKE TWEET