An air-traffic controller receives a transatlantic emergency signal from a lost plane.
READ REVIEW
Next Previous 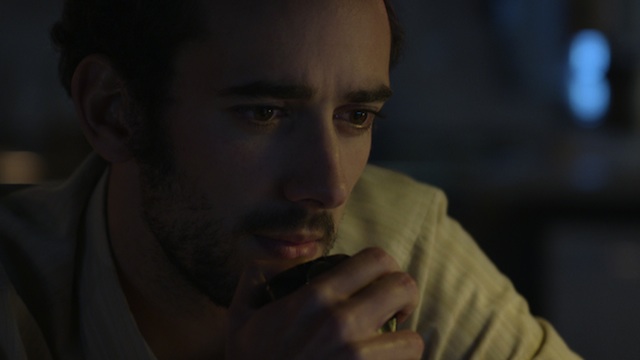 Nature isn’t cruel, just indifferent. So, goes the old adage.  Unable to be swayed from its rigid rules and cold equations, it takes a bit of humanity–a connection–to break through the apathy. That is, if only for a little while.

In Bernardo Nascimento’s superlative short film, North Atlantic, we spend a perfect 15 minutes with two characters who do their best to add human compassion to grim circumstances. Hugo, an aircraft controller on a small island situated in the Azores Archipelago, receives an emergency signal from James, a pilot helming a lost plane. James is far away from land and running out of fuel.  Despite the lingering shadow of disaster, a bond slowly grows between the two men–a conversation separated by static and hundreds of miles.  Both men know that the situation is no one’s fault, and really, that’s what makes their interaction so moving. They accept the inevitable, but are not willing to lose one’s self in the process.

Inspired by true events, North Atlantic is a flawless example of the short form. Its location is confined, its cast small. The script is simple and the climax is incredibly affecting. If only Hollywood could get it this right; I was moved more by this film than I have been by a theatrical release in the past year.  That may seem like high praise, but really, it’s a testament to the craftsmanship of the movie. Nascimento doesn’t do anything fancy–nothing that screams “Hey…look at me!  I’m a  director!” No, this is about character moments, deftly told with warmth and an elegant kindness. Beautiful cinematography accents both lead actors, allowing them to perform, to connect without film-school contrivances. Quite simply, Nascimento tells a story.  One shot in particular stands out–an overhead view of James’s small plane flying amongst a sea of dark clouds, a tiny dot, lost and alone as it challenges an endless atmosphere.  A human connection doomed.

Although North Atlantic is his directorial debut, Nascimento isn’t a stranger to the film world. Born in Portugal, he eventually moved to London where he has worked on several films, including a position as assistant director on Matthew Vaughn’s Kick-Ass. Still, considering North Atlantic’s polish, it’s amazing that this is his inaugural work.  The film is currently entered in YouTube’s “Your Film Festival,” a contest where the winner, chosen by the public, is entered in the Venice Film Festival, and ultimately, given a chance to direct a feature film. I certainly hope he gets that chance. Please vote for the film so we can see more work from this talented director.