95% of the human genome is composed of redundant gene sequences. They appear to have no known biological function. Could a chance event reactivate them? Find out in the newest sci-fi short sensation.
READ REVIEW
Next Previous 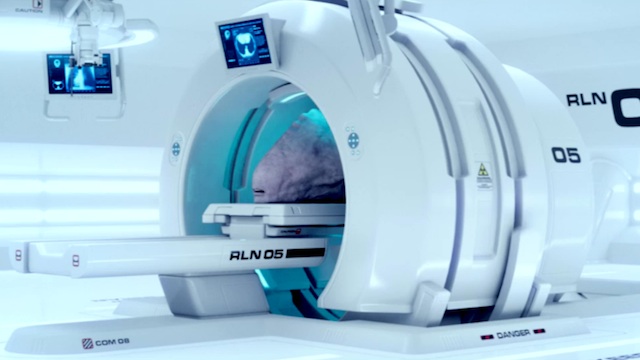 The latest VFX-driven sci-fi short to capture the imaginations of film investment players, The Gate is an accomplished sci-fi horror film that has been compared to Vincenzo Natali’s Splice. The comparison applies to the similarity in plots—both shorts deal with monstrous human mutation—but the comparison applies further in style and tone. Westrup displays some serious chops in developing an atmospheric short that, while heavily utilizing CG creature animation, is not defined by its VFX. This makes it something of an anomaly within the recent trend of sci-fi shorts that have been picked up for feature development.

Deadline has the scoop on that front, as the short has been added to the slate at Wayfare Entertainment, a relatively new company that nonetheless has been making waves, recently closing a deal to adapt Neil Gaiman’s celebrated children’s work The Graveyard Book through Disney. A smaller company with a limited lineup of properties, Wayfare on paper seems like a good fit, the hope being that The Gate will be a priority for them, and not get bogged down in the kind of developmental hell that has plagued some short-to-feature filmmakers.

Interestingly, Westrup and team have bucked recent trends by going through industry to create buzz for the film, instead of shooting for viral success. An accomplished commercial director with Joyrider Films, Westrup and producer, Spencer Friend, announced the film to the world through a limited online launch 6 months ago, via an exclusive with the sci-fi site QuietEarth. They took it down shortly thereafter though, opting instead to go the festival route, where I heard very little buzz about it subsequently. Something was being accomplished however, with the feature development deal being announced late last week. In a backwards process to many short filmmakers, the film’s team is now pursuing viral success, hoping that its industry success will vouch for it.

And I think it should. While not a perfect short—exposition, delivered via report to concerned officials, is a bit clumsy, and the PSA-style ending is annoying—the whole of the film is as strong in its storytelling execution as it is in visual execution. What do you think?