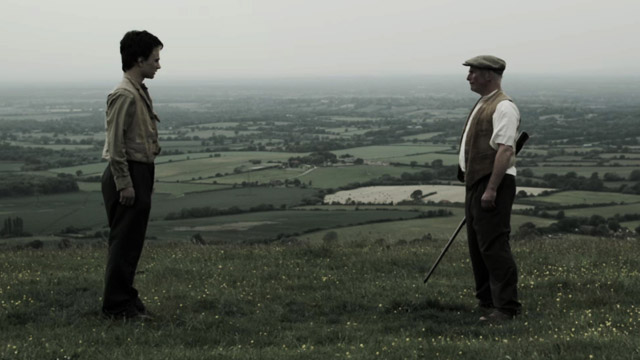 With its opening shot of a blazing farmhouse inferno situated in front of a dreary Irish landscape, The Terms makes quite a first impression, that’s for sure. But, as striking as that introductory visual is, the film grabs you with a different narrative hook altogether: language. As smoke billows and wood turns to ash, you are swept up by dialect—a manner of speaking that is poetic in its cadence, filled with common phrases used in unique ways.  In fact, you are so taken in by the spoken word,  you almost miss the part about a father planning to kill his son.

Based on author Mike McCormack’s short story of the same name, The Terms has been adapted to film before back in 2000. But, director Jason LaMotte’s version is sharper—both visually and linguistically.  The story centers on a hateful relationship between a father and son, and a distinct set of terms in which the elder plans to exterminate the other. What results is a convoluted execution pact as poetic as it is bizarre. Yet, it’s this absurdity that gives The Terms its irresistible tone. The Coen Brothers would be proud.

This is a story about opposites: father vs. son, logic vs. heart, one’s hopes vs. one’s reality—the fine balance between the serious and the absurd. The situation that the film depicts may be ludicrous when viewed from a conventional lens, but the characters never view it as such. This is important as their resulting choices have concrete, meaningful effects. The circumstances may be ridiculous, but the terms by which they act on them never are, and so, the audience actually cares about the outcome.

The acting bears special mention. After all, what good is poetic language unless it is recited well? The son, played by Ciaran Flynn, carries a screen presence well-beyond his years. And, the father, played by Billy Elliot star Gary Lewis, recites each line with a delightful bitterness. The production design, while minimal, is equally top-notch—this film has Hollywood level production values. Shot on the RED One, it (quite simply) looks gorgeous—the rolling Irish hills painted in muted shades of grey and green.

As father faces off against son, The Terms quickly becomes a cadenced back and forth—a morbid game of one-upmanship and wordplay.  It’s an Abbott and Costello routine, just with much graver consequences. And, with its visuals and linguistic rhythm, it’s a film that not only entertains, but also has the viewer clamoring to find out who really does come out first.