The Girl and the Fox

Ilona is a nine-year-old girl who lives in the wilderness with her mother and father. Food is running low, and when a mysterious fox starts killing their livestock, she has no choice but to track down the strange creature in order to ensure the survival of her family.
READ REVIEW
Next Previous

The Girl and the Fox 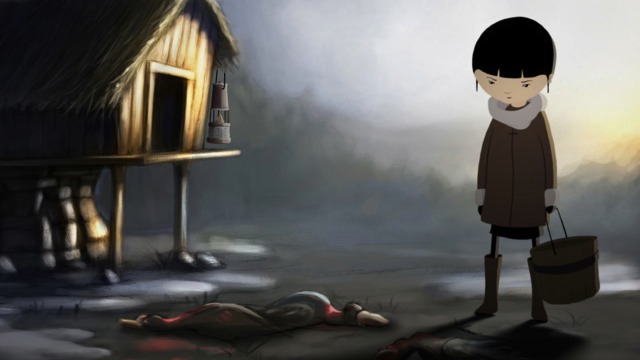 Myth about Nature in Animation
Directed By Tyler J. Kupferer
Produced By Savannah College of Art & Design
& Base14
Made In USA

One of the many reasons I love animation as a medium is its universality. There’s something about the art of motion through pictures that compels creators to tell stories solely with visuals, absent of dialogue or other cultural limitations. Play. Watch. Enjoy. Language not required. Sure, there are a multitude of exceptions, but for many animators—especially those behind short films—the medium becomes a celebration of speaking with one’s pictures. Story through action, emotion through motion. So is the case with Base14’s The Girl and the Fox, a lyrical, dialogue-free fairy tale that is as easily accessible as it is deep.

At its core, the film is about survival. When a mysterious fox starts killing her family’s livestock, a young girl sets out to track and kill the nefarious creature. What results is a series of encounters that turns the very notion of survival on its head—an examination of how one’s enemy can quickly become one’s savior. This is visual storytelling at it’s finest—a powerful and symbolic journey without a single word uttered. The film’s painterly style is a stunning, glorious patchwork of textured brushstrokes. Each background matte would be a worthy addition to a great picture book, a technique that evokes David Hellman’s environment work from the hit video game, Braid. The characters are depicted in a deceptively simple contourless style, featuring organic shapes absent of harsh lines. This creates an interesting contrast between the smooth shapes and the austere wilderness that the characters inhabit.

Director Tyler J. Kupferer’s workflow was quite unique. He pre-visualized character movements with 3D programs and then used the resulting renders as reference to accurately reproduce the motion using hand drawn techniques.  The final output was then put together in a compositing program. The result is effortlessly unique—a film with an obvious 2D aesthetic but with an underlying computer generated feel. Like the character design, the animation is equally fluid. The very way the fox moves is magical—each motion elegant and purposeful, spry but not skittish. A great amount of emotion is conveyed through close-ups of the characters’ faces—quite an achievement considering they are rendered with only simple, organic shapes defined by subtle dimensional shading.

The film has been deservedly recognized on the festival and awards circuit, officially selected for a multitude of fests and even nominated for a Student Academy Award. I’m hoping that the film’s success gives Kupferer, a recent graduate from the Savannah College of Art and Design and now living and working in LA, the chance to keep telling and spinning gorgeous, compelling tales with images. His talents are on display next in another SCAD project titled, Rain Dance, this time in a producing role. The film retains much of the creative talent from this film, and will be one we keep our eyes peeled for!