Overlaid on top of images of hyperkinetic traffic, a familiar narrative is told in a novel way—through text messages.
READ REVIEW
Next Previous 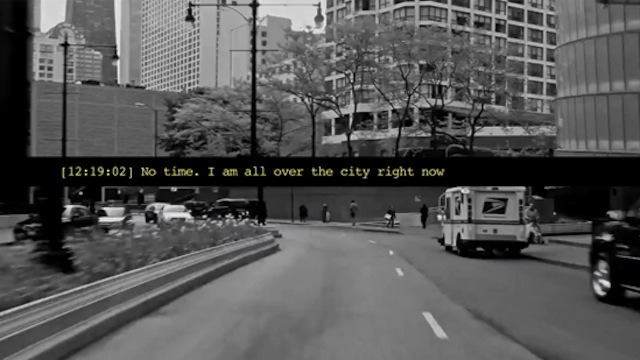 Short films have always been the medium to explore the boundaries of filmmaking, and PHASEONE – SUGAR, nominated for a Vimeo Award in the category Best Experimental, delivers a novel way of telling a narrative, presenting the story of two lovers through the medium most modern relationships work—short texts.

The film itself is very simple. Traded texts appear on screen at a headlong pace, carrying the narrative. A couple, seemingly ex’s, are in contact. One of them is leaving the city, the other is taken by surprise, and wants to meet. Sounds monotonous when laid out so plainly, but these are the plotlines of our lives, and as executed in the film, become very absorbing.  Behind it timelapse traffic images provide a backdrop for the drama written out. Some complain that over the course of a 4min film that the timelapse imagery of traffic becomes a bit monotonous, but it does tie into the plot, and the texts themselves take up so much of one’s attention, it’s difficult to focus on the traffic images as more than backdrop.

But, as backdrop, the use of animated rushs of traffic pictures works powerfully well in three ways: it establishes setting, showing the city in which the dialogue of intersected texts seemingly unfolds; secondly it gives a feeling of how fast modern life can be; and lastly it is a dynamic dramatization of shortened attention spans, making us ponder the effect that has on our relationships, in both the way we communicate and how easy it is to lose interest in a partner.

Transmedia storytelling is a hot topic in film circles at this time. A relatively new concept, it incorporates the use of new technologies across different platforms to engage audiences, changing the way stories can be told and how artists convey emotions and characters through different media. Is PHASEONE – SUGAR, a transmedia project? Probably not, but the experimental combination of different media principles as a storytelling aspect inside a “concluded” short film presents the viewer with new watching experience, and a quite powerful one at that. I can’t help but feel that this media mashup that directors Vadim Gershman and Ryan Powell have given us deserves a name of its own.