Suicidal after the death of his wife, a grieving man takes solace in his childhood friends...
READ REVIEW
Next Previous 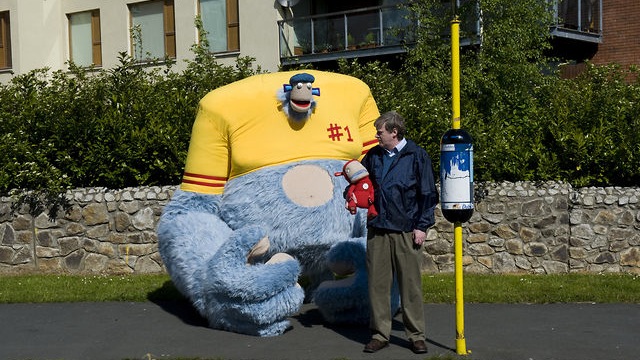 As a kid, whenever something bad would happen, you’d retreat to things of comfort–a hug from a teddy bear, a snuggle of your favorite blanket, or quick chat with your imaginary friend. Well, unfortunately, adulthood often doesn’t have time for such frivolity. After all, we have “real” problems that need to be coped with in serious and adult ways.  Or, so it seems…

Jericho starts conventional enough–a grieving male widow struggles to move on with his life. But, whereas most short films would rest comfortably in the realm of cliché, Jericho takes a decidedly different path. Our suicidal protagonist is reintroduced to his childhood imaginary puppet friends–the soft spoken Jericho and the lumbering Blizzard, who provide him with a new outlook.

The film is written and directed by Liam Gavin, a professional storyboard artist living in London, an occupation that makes perfect sense upon seeing the short’s visuals. Initially, the film flows mostly without dialogue, visually telling us all we need to know with well-composed images. Although it’s a little slow to get started, by the time the title character arrives the film begun a brilliantly dark comedic turn to a world of depression, psychosis, and, ultimately, comfort. Jericho and Blizzard are both stylishly imagined, looking whimsically familiar but also aesthetically unique. It’s refreshing that they are not works of computer generated wizardry, but instead are tangible mounds of fabric and fur–creatures as real as our main character.

With a moody and ominous pacing, Jericho is the type of film that sneaks up on you. Yes, at its heart, the film is dark. But there’s an undeniable sweetness buried underneath its murk that surprises you when it hits. During the movie’s climax as raindrops begin to fall, you realize that the movie’s aim is not to watch our main character drift away into a depressed oblivion, but instead—like the rain— it intends to offer a new beginning, washing away the pain and gloom that have seeped into the cracks of life. It just goes to show you what a little puppet love can do.