A story in two parts, the Zellner Bros. play with audience expectations masterfully in a short that exemplifies the art of the setup.
READ REVIEW
Next Previous 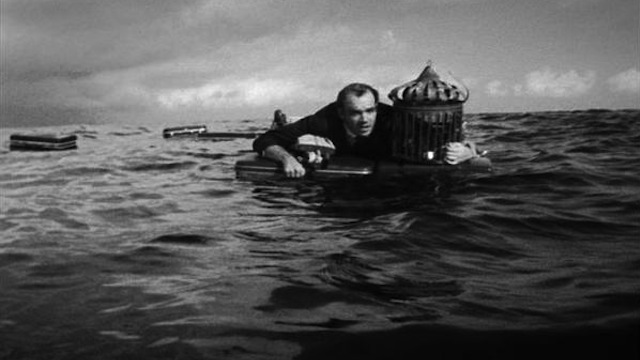 A good movie can be recognized as such for just one successful element; writing, acting or special effects, to name a few. Great endings aren’t essential, and indeed are rare in that they require meticulous setup. Setup requires timing. Short film is not necessarily known for great execution. The sheer limitation of the medium only allows for one punchline, scare, reveal. Why does this review discuss time? Because it is the element that the Flotsam/Jetsam nails on the head with a sledgehammer.

Directed by Sundance favorites the Zellner Brothers, the film begins as its literal definition—a shipwreck in the middle of the ocean. A sad character clings to life on a trunk that could have been the last remains of his possessions. The event which led him here is never explained. His only companion, a caged rooster, to aid him on his journey.

Exactly! The anticipation drives the viewer to have a reaction that can only be executed with perfect timing. The setup is long and curious. Why are watching this? What is going on? Who is this man? Maybe there is something better on TV. Then WHACK!

SPOILER ALERT – Please watch first before you read the rest.

The brilliance of this short is the art of the setup. Zellner Brothers play with the audience expectations through the visual styles. The black and white film look cues the audience to believe that this is a poorly made student project, trying to imitate Andy Warhol. At first, the audience sits with the lone character, floating helplessly. A groaning soundtrack carries film to this point. At a certain point, the internet audience ADD kicks in. Most people will turn to something else before they realize the true brilliance of this short.

The movie flips from film to video as our main character is attacked by a shark! The man is carried aboard the boat with his leg sliced open from a bite. Panic ensues. Zellner Bros. remind the audience that they are watching a movie. This setup is a movie. The payoff is played as reality. The filmmakers did not prepare themselves for the danger they were about to face in the same way the movie’s main character lacked preparation for the shipwreck. The ending plays the beginning.