Nothing and no one can wake Princess Betty in this playful riff on fairytale conventions.
READ REVIEW
Next Previous 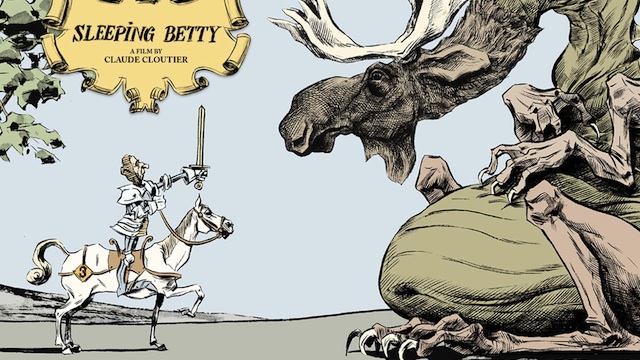 Neither bumbling witches nor tuba playing satyrs can wake Sleeping Betty from her stupor. Will a kiss from Prince Charming do the trick?

If you are fooled – as I was – by the Disney-esque opening sequence to this short animation, the New York yellow taxi cab being pulled by a trotting Victorian gentleman will soon bring you to your senses. This is no ordinary take on the Sleeping Beauty tale.

Nothing and no one can wake Princess Betty. All the zany attempts to bring her back to consciousness fail, from a giant shaking her bed to a doctor giving her derrière a medical examination. In desperation the King dials up SOS Prince Inc to save the day. Prince Charming – who looks uncannily similar to Prince Charles – is dispatched on his uber-flexible horse. But will his kiss revive the sleeping princess? Will their lips even touch?

Artist and director Claude Cloutier uses the film playfully to riff on fairytale motifs. His decision to juxtapose the modern with the magical and the artistic with the absurd brings out the original spirit of overly familiar fairytales, in which other worlds intersected with our own.

Every scene is hand drawn in brush and ink and Cloutier spent six months working on the seven thousand sketches that make up this animation. Cloutier’s background is drawing comics, and he proves successful at bringing the precision and complexity of comic strips to the screen. His exacting standards saw him pose a horse mannequin to make the absurd galloping of Prince Charming’s horse as true to life as possible.

The gags are overly drawn out, but you’ll find it difficult to suppress a smile at this cynical, surreal and ultimately cute animation.