Tenacious D: To Be the Best

Comedy/Music Duo rebound from a disappointing feature film with a killer short.
READ REVIEW
Next Previous

Tenacious D: To Be the Best 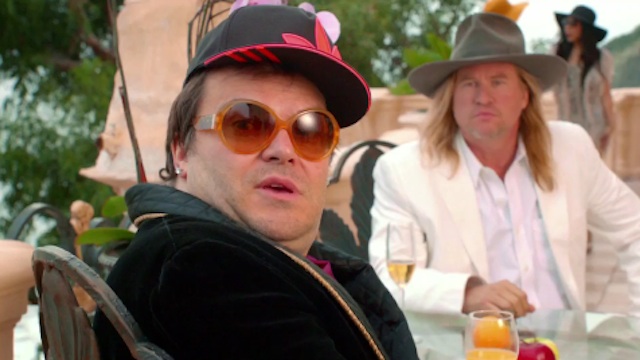 2006 was a tough year for comedy duo/rock band Tenacious D.  In what should have been a moment of media-crossover glory, musicians Jack Black and Kyle Gass were instead greeted by box office ambivalence; their comedic musical feature, The Pick of Destiny, was a flop.

Six years later, both Gass and Black are ready to tackle the comedic narrative again–this time in short form. Produced by Partizan and directed by Jeremy Konner (of Drunk History fame), Tenacious D-To Be the Best is a little bit of everything: part marketing exercise, part media satire, part absurdist romp, and of course, part musical.  Comedy-wise this is more Anchorman than Annie Hall, but that works perfectly for Gass and Black’s comedic timing and sensibility.  Over the past few years, it seems that Jack Black has followed in the unfavorable footsteps of  Adam Sandler (i.e. collect paycheck, then read script), so it’s nice to see him genuinely funny again. And, while To Be the Best doesn’t exactly make-up for such cinematic travesties as Gulliver’s Travels, it does make the path to forgetting suddenly seem traversable.

In the film, Black hilariously sends up his image as the rich millionaire who sold out artistic integrity for celebrity hot air. Gass plays his sidekick role with an equal amount of self awareness. In a world that has since seen the creation of other, similar comedy duos such as Flight of the Conchords or even Tim and Eric, it seems that Tenacious D understands the comedy playing field in which it is now competing.  It also doesn’t hurt to have a scene where Val Kilmer wears a fedora and sips white wine.  That, ladies and germs, is the stuff of comedic genius.

Absurd humor is tough to pull off. If it’s too “random,” it just isn’t funny. It has to have the just the right amount of chaos combined with grounded, traditional jokes to make the whole formula work. For the most part, To Be the Best hits.  From a great gag involving two men hugging to a Rocky montage send-up filled with celebrity cameos, the film is filled with more laughs per minute (LPMs) than any similar branded content that I’ve seen in recent memory. Yes, ultimately, the movie is designed to promote the band’s upcoming album, but it’s damn funny at the same time. More importantly, as the film proves, Tenacious D’s brand of humor works best in small doses. While Black and Gass might not have been able to carry a 90 minute rock opera, they’re certainly welcome anytime to tell a six-minute yarn of loss, redemption, and the ultimate rock comeback.

In fact, it might just be the greatest and best comedic short in the world…tribute.