A beautiful pixilation short imagining a world controlled by light, and a young man determined to find his own agency within it.
READ REVIEW
Next Previous 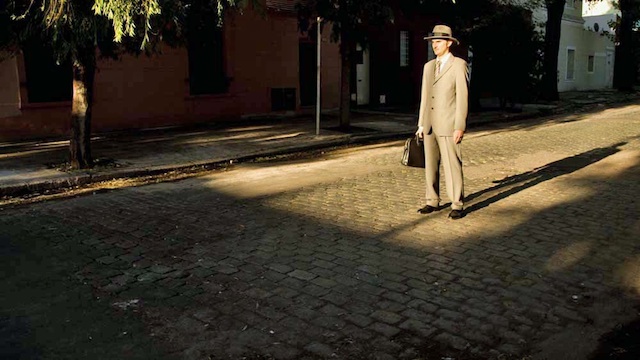 James McNally
Argentinian director Juan Pablo Zaramella has been making short films for a decade, but while he started as a stop-motion animator of objects (see a charming one utilizing food), this, his most impressive recent film, is an interesting “live action” stop-motion, in which real actors are animated frame by frame. This form of animation, called pixilation, while not requiring the creation of models, is likewise painstakingly slow, since each frame must be composed and shot separately. It seems especially difficult since live actors can not be expected to hold their positions the way inanimate models can. Luminaris is the story of a man living in a world controlled by light. Each morning, the inhabitants of that world are woken up and pulled to their jobs by the sunlight, as if by a magnetic force. Our protagonist works in a factory making electric light bulbs, but has larger ambitions of his own. The setting of the film is a classic Buenos Aires, revisited from a fantastic point of view. The film uses a collage of styles, combining art deco, tango, surrealism, and neorealism. This mix of influences is directly linked with the history of Buenos Aires: the city and its population themselves are a mix of different cultures. The film was inspired by an instrumental tango piece called “Lluvia de Estrellas” (Star Rain) composed by Osmar Maderna in the 1940s. Director Juan Pablo Zaramella explains:
I first became acquainted with this piece of music as a child, because my elders used to listen to it. I had always liked this piece but, as an adult, it gradually dawned on me that this music could be like a score of a film that had never been made. In 2008 I was granted a creativity residency by Abbaye de Fontevraud, in France. I decided to take this opportunity to develop this project. Originally, I approached the project as a puppet animation story, but doing some pixilation tests in the gardens of Fontevraud, just for fun, the seed of the present short appeared: the idea of sunlight as a magnetic force.
The film took more than two years to make, mainly due to the unpredictability of weather conditions and especially the movement of the sun, which changed the shadows on the locations every day. “Both the speed and the intensity of sunlight changed during the shooting of a take, so we had to modify the time-lapse frequency and the exposure of the photographs all the time,” explains Sergio Piñeyro, director of photography. The long months of work paid off; in addition to numerous other honors, the film was named to the 2011 Oscar® shortlist for Best Animated Short Film.
Vimeo Filmmaker's website
LIKE TWEET