A titillating satire that both exposes the commodification of women and hints at a reversal of power in one of the more tantalizing yet uncomfortable films you're likely see this year—NSFW.
READ REVIEW
Next Previous 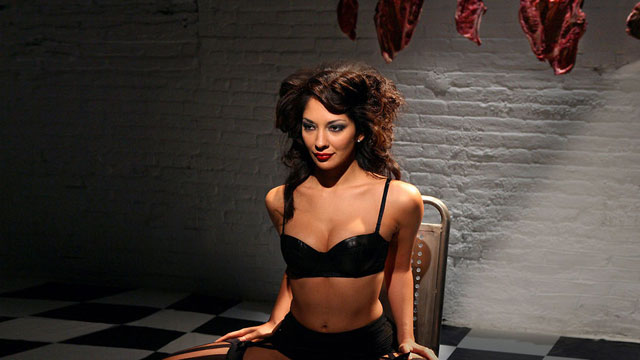 Words will not do justice to the provocative and indelible images in Melanie Abramov’s examination of the way we commodify women’s bodies, but I’ll try.

Dame Factory combines the art direction of Peter Greenaway with the body horror of David Cronenberg and emerges as a suitably magnetic indictment of the male gaze. In four short vignettes, impeccably groomed women in their underwear use their bodies to produce food and drink for a banquet of unseen (presumably male) guests. Although the setting appears to be a factory or perhaps a slaughterhouse, the women appear in clean and well-lit rooms, enacting their rituals alone or with female help. The film itself was created by “a 99% female cast and crew.” This subtlety gives the film its power. Are the women themselves in control of this process or are they working for an unseen boss?

Abramov grew up in a Russian-American family near Coney Island in Brooklyn, and traces her love of surrealism to living so close to an amusement park. Perhaps that’s what gives the film its oddly celebratory tone. These women, while commodified, certainly don’t look or act like victims. And the film is unabashedly sexy, adding an extra layer of discomfort for the viewer. The mix of titillation and disgust reminds us that sexuality can be both transcendent and bestial, and that perceptions of power can shift in an instant.

Dame Factory began its festival journey last June in Abramov’s hometown, winning awards at both the Brooklyn Film Festival and the Coney Island Film Festival. In the few short weeks the film has been posted to Vimeo, it has been viewed more than 40,000 times. The film ends with a sumptuous banquet laid out and a number of empty chairs. Based on the audience response, they might need to add a few more.

Oh, and stick around after the credits for a very short behind-the-scenes montage that communicates the playful spirit in which the film was made.