An American advertising producer in Shanghai tries to sell fast food to the Chinese. An endearing portrait of a modern day "Mad Man."
READ REVIEW
Next Previous 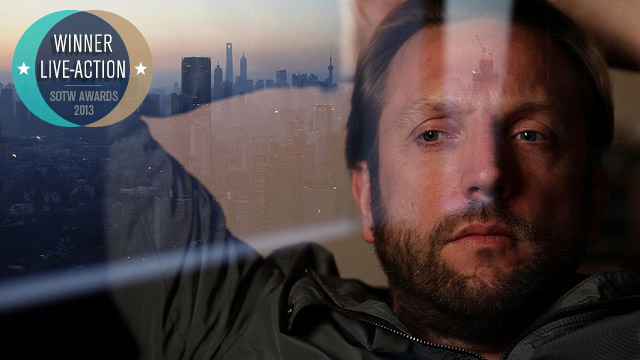 Jason Sondhi
It’s an old writing truism: write what you know. Acclaimed commercial director Doug Nichol adapts the philosophy to documentary filmmaking in Sunshine. While in Shanghai to film a commercial, Nichol turns his handy 5DMarkII upon his friend and longtime producer John Benet, and what results is a remarkable work, one that tells two stories with equal aplomb—an ethnographic snapshot of the young, developing Chinese ad industry, but also the confessions of a jaded, cynical American ad man. As our narrator, Benet’s perspective is undoubtedly at the center of the film, but what is most praise-worthy about Sunshine is how intertwined the two stories are, and how they mutually inform and cast doubt upon the other. The film’s early development focuses on the creation of a McDonald’s commercial, and follows beats familiar to fans of Lost in Translation and other travel films, as Benet half-mocks, is half-amazed by the cultural idiosyncracies in his interactions. Enjoyably, Benet is a great interview subject, not feeling the need to hold back, alternating freely between caustic wit, and meditative musings. Benet is a complicated character, he can be snarky, but he recognizes that in himself, and doesn’t necessarily appreciate it. In a film that is edited impeccably, there is a great change in tone around the 7:55 mark, as Benet eases up on the mockery and turns more pensive. It is evident that much of his cynicism comes from a lack of self-esteem. Perhaps it is the setting, perhaps the toll of 23 years in the industry, but Nichol has caught the man right at the moment that the well of self-justification runs dry, as Benet finds it harder to find value in his work, and by extension, himself. Nichol’s decision here to photograph the interview in a dimly lit hotel room was absolutely perfect. The darkness creates a contrasting mood of guardedness and confession, like Cold-War spies sharing secrets. The pessimistic appraisal of his chosen career transforms itself into guilt, as he comes to China in order to add to its burgeoning commodification culture. Nichol captures familiar images of the country’s rapid physical change: the skyscrapers the cars, the ubiquitous advertising, and a select few images poignantly evoke the erosion of history in the march for progress. It is at this point that Benet is shown visiting an old propaganda shop and makes the connection which gives the film its name. He sees the concept of Chinese advertisers casting what they term as “sunshine” people, established in the beginning of the film, as similar to phrasing and iconography evident in Mao-era propaganda. Is this a brilliant observation from an experienced ad man? After all, who better to recognize it? Or is it instead a desperate attempt deflect blame? By connecting advertising to authoritarian rule, he doesn’t have to guilty about being someone who is “introducing” these concepts to China. Simultaneously he is able to positively affirm his presence in the country as a uniquely positioned observer of change. Or is that too cynical on my part? As usual in documentaries, the truth likely lies somewhere inbetween. Whatever the case is, it is clear Benet needs to find validation for himself outside of his profession. He explicitly says as much in the film’s closing line, after comparing himself to his father who spied on China during the Korean War. The line provides a fitting close to both storylines, the one on Benet and the one on China, as he says ”I enjoy… (the work), but I’m also doing something else, and sometimes I’m not aware of what that is.”
Vimeo
LIKE TWEET