If at first you don't deliver cocky perfection, try try again—a behind the scenes look at the making of a classic action hero in this comedy from On the Lot alum, Justin Lutsky.
READ REVIEW
Next Previous 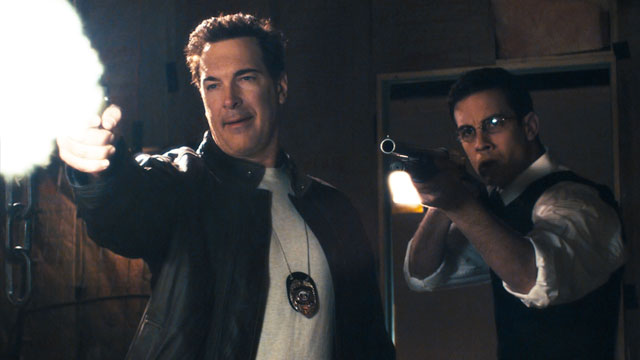 How does John McClane always get it right? You know… the perfect timing as he barrel rolls from a speeding car? The astonishingly accurate barrage of bullet fire to clear out a room full of thugs? Or, best of all, leaving just enough time to deliver a pithy one-liner right before he takes out the bad guy in the black hat? Well, if The Action Hero’s Guide to Saving Lives is any indication, Mr. McClane learns from experience. Literally.

Serving as a sort of Groundhog Day for the trigger-happy set, The Action Hero’s Guide is a clever and humorous pastiche of action movie cliches—from stock character archetypes to pun-filled wordplay (there’s even a few Wilhelm Screams thrown in for good measure). Our hero, the conveniently named Ace Mulligan, must stop the bad guys and save the girl before it’s too late. And, as he sets out to complete his mission with all the prerequisite heroic machinations, he realizes that sometimes the most hackneyed choice isn’t always the right one.

Guide’s “in-your-face” form of satire works well in the short form. The movie isn’t subtle, but really, it isn’t meant to be. Our hero is played by Patrick Warburton (that’s Puddy from Seinfeld for those of you playing at home), and he is perfectly cast as the cocky badass who can do no wrong. With each iteration of the story, he masterfully poses and snickers for the camera, completely self-aware of the role he is expected to fill. As is the case with all typical Hollywood action movies, we know our leading man can’t fail. This time, however, we get the unexpected treat of seeing him try and try again until he gets it right. The idea may predominately be played for laughs, but at the same time, the film is slyly winking at the audience. Ace isn’t the only one who’s been here before; with decades of blockbuster tropes under our belts, so have we.

Helmed by commercial director and On the Lot alum, Justin Lutsky, the film is shot with a glorious big-budget sheen on micro-budget specs. The highly saturated color palette and prominent lens flares would be at home in any summer multiplex, as would the kicking retro score. And, while the film’s gimmick begins to get a little tired towards the end, it’s hard not to admire the sheer amount of creativity that Lutsky and his crew have put into such a quickly made and polished passion project.

So, Yippee-ki-yay, fellow short film watchers. Grab some popcorn and sit tight. Ace Mulligan is on the case.