The Oscar-nominated film + app about a man's magical love for books that put the beloved Moonbot Studios on the map. *UPDATE: The filmmakers have removed the free version, but you can purchase the film on iTunes for $1.99
READ REVIEW
Next Previous 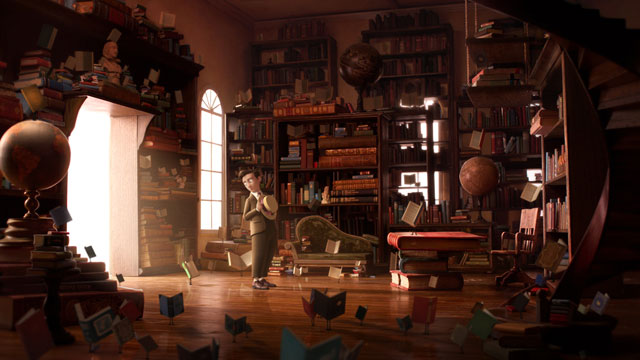 Michelle Higa
As I write this, The Fantastic Books of Mr. Morris Lessmore, directed by William Joyce and Brandon Oldenburg, is receiving its official Oscar nomination. The film has won many awards on the festival circuit, and deservedly so. Both the story and the visuals are clearly crafted with care. The story of Mr. Lessmore is a simple one. We meet Morris quietly writing his book, when a freak storm uproots him and his city, Wizard of Oz-style, leaving behind not even the words on a printed page. While picking up the pieces, he meets a friendly book that leads him to a new home and life. It is a wordless story about words and stories. The short was created as a sort of calling card for Moonbot Studios, a new studio founded by Willima Joyce, Brandon Oldenberg, and Lampton Enochs. Based in Shreveport, Louisiana, the boutique knew as they made Lessmore that this would be the film that had to represent what they were capable of and who they were—a studio dedicated to building stories from the inside out. It also functions as a sort of origin story for the studio—formed in the wake of Hurricane Katrina, with their love of storytelling and its nurturing power on their sleeve. While Lessmore is a short film that uses the language of film nostalgia to tell a story about nostalgia for books, it is also an iPad app that proudly loves cinema and books. The iPad app was not an original part of the plan, but when Apple announced the product a couple months into production, Moonbot decided they would tell their story as an interactive storybook in addition to a film. The result was one of the most popular storytelling apps of all time drawing praises for the studio as being a “Pixar of the iPad age” (The Atlantic). Moonbot’s followup film/app, The Numberlys, was just released last month. There’s a moment in the short film where Morris discovers a good story and his face lights up with elation, then fear, then concern. For me, The Fantastic Flying Books of Mr. Morris Lessmore as both a short film and iPad app were able to do the same—create a world that you could lose yourself in for just a tiny bit.
Vimeo (private) iTunes ($1.99)
LIKE TWEET