The Man with the Beautiful Eyes

A group of boys find themselves fascinated by the one rundown house in the neighborhood in this animated version of a Charles Bukowski poem.
READ REVIEW
Next Previous

The Man with the Beautiful Eyes 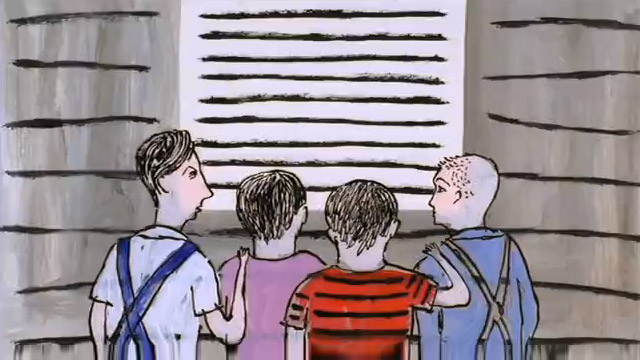 A group of neighborhood boys become obsessed with one strange house on the street—the one with bamboo growing in the yard and all the windows boarded up—the one their parents warn them not to go near. So, of course, they do as boys do, and play in the yard, and one day a disheveled man emerges from the house. The boys find themselves oddly mesmerized by this strong man with beautiful eyes. Days later the house burns down and they become convinced that their parents did the deed. It’s a story about the lasting impressions of childhood and the beauty in naiveté.

The story comes from a poem by Charles Bukowski—”the laureate of American lowlife” (Time)—who wrote often of the ordinary life of growing up poor in LA.

The Man with the Beautiful Eyes is crafted from a beautiful mix of simple painted images and handwritten typography. The look is the collaboration between animator Jonathan Hodgson and illustrator Jonny Hannah who’ve made one of the most beautiful traditionally-animated films of the last decade.