When his soul leaves through his eyeball, it is up to two friendly deer to take care of Dr. Breakfast's catatonic body.
READ REVIEW
Next Previous 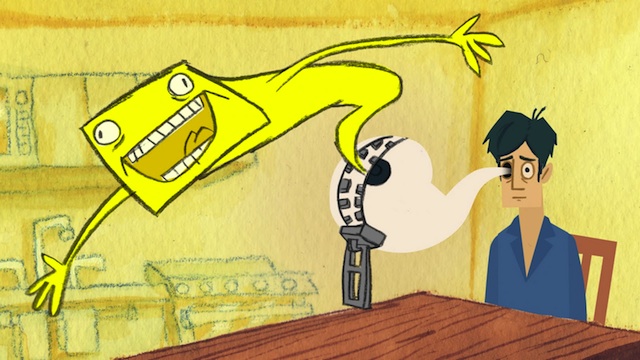 Stephen Neary doesn’t have a ton of work to his name, but what exists is impressive. His graduation short from NYU, Chicken Cowboy, won a plethora of festival awards, and his work with Blue Sky Studios, and NPR, caused Variety to call him one of “10 animators poised to become household names”. His path to that household name status was helped along a little bit yesterday when this film, Dr. Breakfast, was announced as a selection of the Sundance film festival.

The film is a wacky, surreal treat, full of pleasing colors, deadpan characters, and bizarre psychedelic effects. Dr. Breakfast’s insatiable soul exits his body, going on a rampage, and it is up to two kindly deer to take care of him.

More than just a bizarre premise, the comedy really works in this film. The laid-back deer, the anguished animals being devoured, the inexplicable addition of children’s voices in the sound design, all of it works together in a pleasing, if discombobulating, whole.

Congrats to Stephen. We’ll be seeing him in Park City next month, and hopefully will be seeing his work on this site in the years to come.