Award-winning cinematographer and DSLR-expert Vincent LaForet continues his collaboration with Canon in this showcase film for the new c300 camera.
READ REVIEW
Next Previous 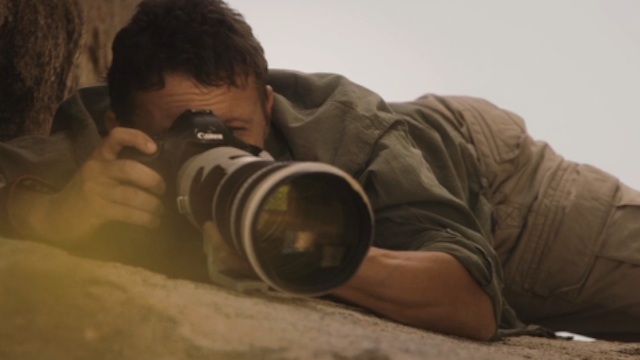 Last night was an exciting time for camera-nerds as two huge, long-awaited presentations arrived from the companies that have most revolutionized low-budget filmmaking—Canon and RED. Two new cameras were unveiled to the world, the Canon c300, and the RED Scarlett X, and both companies competed fiercely to be the one to impress filmmakers and cinematographers more.

I won’t go into the blow by blow of what the blogosphere is saying, instead referring you to our friend Koo at No Film School, but the initial buzz is that the Scarlett has better specs. Specs in and of themselves don’t make a successful image however, and on their side of the PR war, Canon has a nuclear weapon—Vincent LaForet.

LaForet, the famous photographer, cinematographer and director, was present at the birth of the DSLR movement. It seems crazy, but it was only 3 years ago that Canon unveiled the 5D Mark II, a professional still camera that could do video as an afterthought, and to show it off Canon had LaForet prepare a little film called Reverie for the launch. It’s hard to oversell how ape-shit people went over it—millions and millions saw it on various platforms and it sparked huge messageboard discussions. Just like that the DSLR revolution was underway and there was no looking back.

Canon is hoping the LaForet magic will rub off on the c300, a $20K camera that is pure pro, adding to, and fixing, a lot of the consumer level features that drive users of the 5D Mark II insane. To that end they produced this film, Mobius, to showcase the capabilities of the camera.

The film’s lovelieness is its least surprising trait. Shot in the Mojave Desert under extreme conditions, the images produced are quite nice. Not to be a shill for Canon, but the “latitude” of the images, the range between lights and darks, is pretty phenomenal.

This appreciation soon takes a backseat to the action though. Yes, you too can make an absorbing film if you include well-shot car chases, foot chases, and guns, and employ mini-helicopters, jib cranes and a bunch of other fun tools. The editing and camera work in these sequences, while not ground-breaking, is expertly handled, leading to some visceral scenes that make you forget any plot holes.

And plot holes there are. The film revolves around a nifty little gotcha finale, that, taking in the title of the film, you might be able to guess at about 2/3rds in. That’s better than the embarrassingly simplistic twists I generally see in short films however where I can guess the twist solely from the title and the film’s description. In fact, while the logic of the character motivation falls apart if you think about it too hard, kudos must be given to the writing team of Jon Carr and Justin Hamilton, who thought up a rather well-constructed and thought-provoking story. This is the kind of intelligent sci-fi that really works in the short film realm, and I’d be pleased to feature it irrespective of the camera-driven hype.

When you’re done watching, take time out to see the behind the scenes featurette, produced by Vimeo, featuring the work of two of the big names on the staff, Blake Whitman and Sam Morrill. You get to hear Vincent talk a little bit about the camera, as well as see some shots of the impressive production techniques brought to bear in Mobius.