A secret order of priests guards the thin border between our world and the realm of darkness in this inventive horror film from Argentina.
READ REVIEW
Next Previous 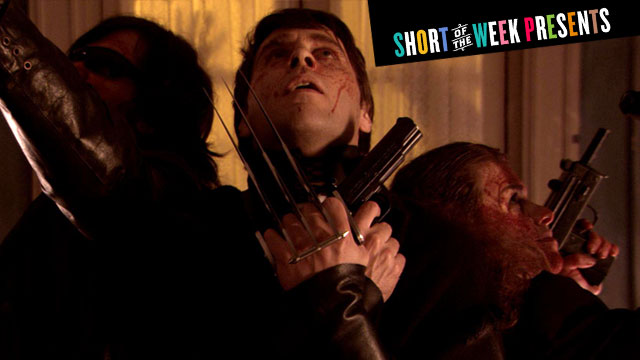 For as long as we’ve told stories, we’ve imagined otherworldly creatures inhabiting our bodies. Deus Irae images this common nightmare by combining the shock value of The Exorcist with the vigilante heroism of Watchmen. A secret order of priests protects the thin border between our world and the realm of darkness. When verses don’t work, they pull out the weapons.

The short film played Fantastic Fest and almost every major genre festivals out there. I was lucky to catch the premiere at the Toronto After Dark festival where it took home the audience award. For a low budget short, Deus Irae has an incredibly high production value. The creature design and effects are superb—on the level with Guillermo del Toro. There’s very little CG here—most of it’s done with good old-fashioned practical effects.

Argentinian director/producer duo Pedro Cristiani and Guille Gatti of Nerdhaus Films have a mission to bring their particular brand of horror to the world. As a short, it begs for a larger story. Thankfully there’s a feature version is in the works. Find out more at the Nerdhaus website.

Thanks to producer, Guille Gatti, for submitting the film.