A young monkey, initiated by his master, will pass his transition to adulthood. He will have to fight fire, metaphor for his fear of growing up, by taming the sound of the sacred djembe, symbol of independence.
READ REVIEW
Next Previous 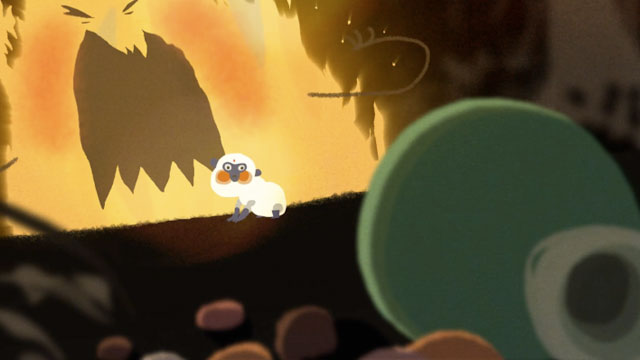 We feature a lot of student animations, not only because, well, it’s students who seem to make the most short films, but also due to a certain spark contained in them that I think of as the debut-album corollary.

See, we know this intrinsically with bands—sometimes they hit it out of the park the first time out. It’s a regular thing for music artists to burst out of the gate with something that is fresh, yet so wholly-formed, that we all stand up and take notice. As they grow they might become better musicians, they might gain more life experience and write better lyrics, we might all fundamentally agree that a later album is objectively better, but we’ll look back and often feel that the vitality of the first album is never matched, as its hard to replicate the strength of that energy and ingenuity that achieves fruition through years of striving, working and dreaming.

Delphine Dussoubs is quite a talent, and I’m sure we’ll be hearing much more from her in the future. But with Little Monkey, her graduation film from France’s l’EMCA school, she is eligible for the first-album corollary as she has produced a wonderful and original short that showcases her creative voice to its fullest.

The film is the hero quest in miniature, filtered through the Native tradition of the Vision-Quest, as a brave little monkey must confront his fears in order to become an adult. The animation is colorful and superbly designed. As much as I fake it on this site through my reviews, I’m not an animator so I can’t really tell you what’s going on technique-wise, but by way of analogy, the flat dimensionality and strong colors of the work almost look like someone put lovely, but crude, MS Paint compositions in motion. Yet that comparison seems somewhat derogatory and does not do justice to Dessoubs technical skill as she showcases a firm command of dynamic shot selection and navigates the shifting dream-scape setting o the film with aplomb. While the visuals are the primary appeal, the story, while simple, is certainly fun and enjoyable as well.

There seems to be no shortage of exciting French schools pumping out top-notch animators but I don’t know if we’ve featured work from l’EMCA before. A batch of work has just come online however. If you enjoy Little Monkey, make sure to check out Poussière as well, a touching and nostalgic film that takes us on the journey of an incredibly important dust bunny.