The Rules of the Game

**CURRENTLY OFFLINE** - A man pulls up to a palatial estate and proceeds to tell us a story—a tale of love and betrayal. But the connection is uncertain and the twists aren't so familiar.
READ REVIEW
Next Previous

The Rules of the Game 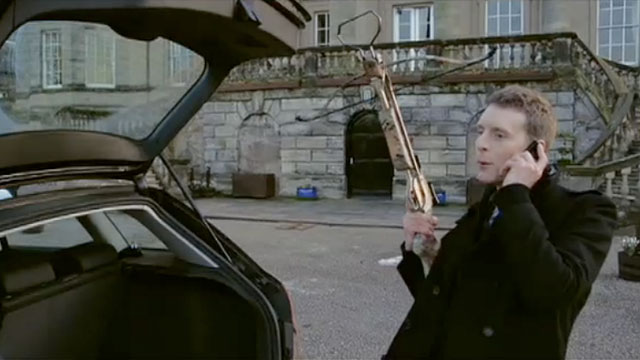 A lot of good short films out of the UK come from people like Tom Daley, folks whose experience primarily lies within the world of theater. I think of gems like Frankie, and I appreciate the trend. While often staid in presentation, these films generally shine in two areas that short film is usually not so strong in: writing and acting. The Rules of the Game is certainly accomplished in both these areas, plus has the added benefit of a professional look, having been shot on a Red One.

Daley directs off of a script by Sam Michell, and Christopher Harper shines as the film’s sole actor in this dark treat.  The film is an extended monologue, cut up in pieces of course, as Harper’s character, Henry, opens up and goes through a large mansion estate we see him arrive at as the film begins. Henry tells us a story about a man and women who fall in love and decide to get married. From the get-go Henry’s motivations are ambiguous—is it auto-biographical? A parable? Why is Henry telling us this? Slowly details emerge, but Henry’s relationship to the unwinding story, one of infidelity and betrayal, still eludes the viewer.

I first caught this film when it came online briefly as part of 2009’s Cannes/NFB Short Film Corner online competition. Curated by Danny Lennon, it was a fine group of shorts, featuring the viral hit The Black Hole, and SotW picks The Facts in the Case of Mister Hollow and the “I can’t believe we never featured it” animation Sebastian’s Voodoo. I realized it was online when the BBC bundled it into its HD Short Film television program earlier in the year with Oscar-Nominee Wish 143. If you managed to miss it those times, rectify that now!