A late night driver's collision with a deer in the headlights takes a strange turn in this painterly 3D animation.
READ REVIEW
Next Previous 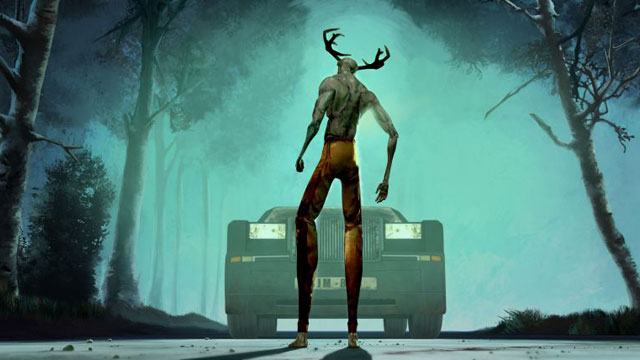 The cinematic car crash often slips into one of two predefined moulds; a blair of headlights, the screech of tires followed by the off screen smack of impact and later reveal of a totalled car, or the frenzied cacophony of a high speed chase with cars crunching, sailing through the air and bursting into flames left and rightI admit, we’re occasionally blessed with the balletic spin of a Punch Drunk Love but such breaks from convention are certainly in the minority. However, variance aside, I’m willing to go out on a limb and state that the high speed meeting of two objects in space and time has never been portrayed with such artistic flourish as it has in Mighty Antlers.

The combined bachelor film project of Sune Reinhardt, Mikael Ilnæs, Michael L. Fonsholt and Jouko Keskitalo at Viborg’s outstanding filmmaking institute The Animation Workshop, Mighty Antlers is the story of a man, stalled in a life on the road, who gets a lot more than he bargains for when he bears down on the deer trapped in his headlights on a late night drive. The film’s synopsis suggests ‘this particular hit and run has jaw crushing, battering consequences,’ I think it may be more apt to say that The Driver gets an arse-kicking which makes the beating Angel Face takes from The Narrator in Fight Club (one of Mighty Antlers’ influences alongside Duel, North by Northwest, The Twilight Zone and Guy Ritchie) look like the gentlest of love taps. This isn’t to say Mighty Antlers is simply an exercise in animated brutality; the drawn/cg animation, completed over an 8 month period, is full of a beauty that makes it impossible to turn away from the ear ringing, face scraping violence on screen. The film’s production blog and making of video demonstrate that the team treated each frame as a work of art, with landscapes and character designs that wouldn’t look out of place in a gallery.

The only ambiguity present in Mighty Antlers is if The Driver’s experience is a real otherworldly encounter or a pain ravaged brain’s interpretation of the trauma this body’s just endured? The team’s inspired use of the auditory vernacular associated with car crashes in place of the expected sound fx as the two battle it out, leads me to believe the latter is closer to the mark. Either way, it’s a sure bet that the next time something bounds across my path I’ll be stamping on the brakes and praying to God we don’t collide.