An acronym for "Let's Get Fucked Up and Die", this student work is purposely provocative in exploring the artist's own feelings about growing up suburban.
READ REVIEW
Next Previous 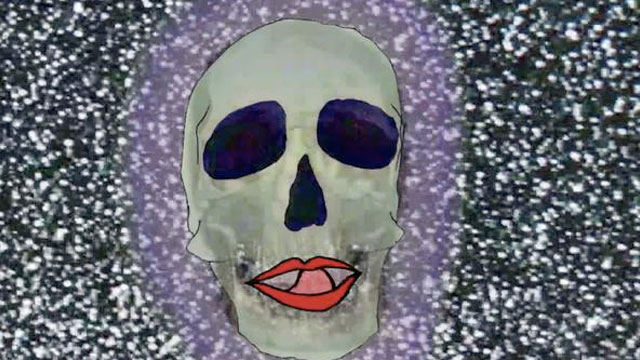 I was thinking about the recently concluded Ottawa International Animation Festival, noting that there weren’t a lot of winners this year that were online yet. Last year there had been, and I was able to put together a nice post of examples, but this year nada. Frustrated, I started searching around for winners from last year that hadn’t been online when I did the post, and lo and behold, Kelsey Stark’s LGFUAD, winner of the the undergraduate animation award in 2010, popped up. A controversial, love-it or hate-it film, to me it is everything I want out of a student animation: fresh, personal and conceptual, but edgy, uncomfortable and uncompromising all the same.

There is no narrative, a girl eats pizza and relates a series of surreal, stream-of-consciousness stories about how cool it is to be a ghost. The stories are richly psychosexual and violent, but the titillation is contrasted by the monotone delivery of the girl, who could do an adequate stand-in for Aubrey Plaza. In the video’s description, Ms. Stark talks about the peculiar tension and restlessness of her experience growing up in suburbia as being a major theme of the work, and the disconnect between the film’s extreme stories and the narrator’s affected, blasé tone, highlight a key point; to Ms. Stark youth is characterized as “a possession by certain intensities that manifest themselves within the body somewhere between extreme emotion and a complete lack thereof: void.”—intensities which receive their outlet through sex, drugs, violence. It is in my mind a cogent way to characterize that jaded, dissatisfied personality type, exacerbated by a hipster-emphasis on cool and from growing up in media-drenched environment where one is taunted constantly by what one doesn’t have, or hasn’t experienced. The director’s statement is a bit overwrought, which will likely give many of you who are yourselves jaded another reason to dismiss the film as indulgent faux-intellectualizing crap, but it importantly ties together the conceptual and personal elements of the film, giving it the context necessary to reconsider it as more than an exercise in grotesquerie.

What helps these heady themes go down smooth is the playful style which Ms. Stark brings to bear. Retro in nature, the film looks like a lost artifact from MTV circa Liquid Television’s hey-day. The ghosts are especially sweet, these chaotic moving shapes of scribbled crayon, they really look as if it is some abstract spiritual energy that is binding their ill-defined forms together. I totally buy them as the product of some rampaging Id. So, even if you don’t dig the themes of the film or their presentation, I think it’s clear that LGFUAD sports a cohesive and interesting visual aesthetic, and the sheer diversity of images and transitions shows a filmmaking facility on Ms. Stark’s part that makes her a talent worth looking forward to in the future.