A shy bodybuilder ventures out on a date against the wishes of his over-protective mother in this powerful character-driven film from Denmark.
READ REVIEW
Next Previous 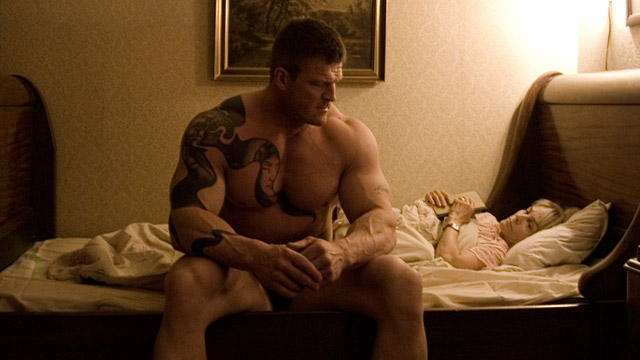 Dennis is a massive bodybuilder prepping for the Danish national championships. He also still lives with his mother and dreams of finding the right girl. An awkward date spirals into a more awkward party and a newfound respect for his home.

Dennis is one of those rare films that creates a strong identification with a protagonist we rarely see in films. Dennis is played by Kim Kold, who with great subtlety shows us the deep longing underneath all that muscle. It is a film about loneliness, hope and trying to belong—no matter how big your muscles are you’re just as fragile as anyone else.

The masterful thing about this piece is that it takes a story we all know well—the date gone wrong—and imbues it with a fresh perspective. It’s expertly shot in that wonderful Dogme-95 style that makes every nuance of performance stand out up until its pitch-perfect ending.

It’s also refreshing to see a film that is interested in telling a story about a character we identify with. Of late, I’ve become frustrated with many festival darlings that seem more interested in creating atmosphere and having great shots than creating an emotional experience for the viewer. And apparently I’m not the only one who thinks so—the film has been viewed almost two and a half million times on youtube.

It deserves every one.