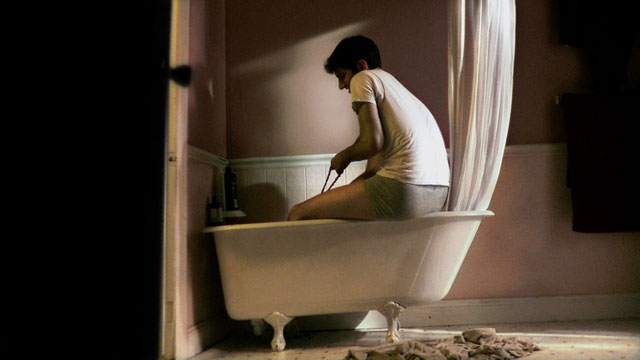 When I talk to people about why I like short films and why they should too, one of the handy descriptions I use is that they are so much more experimental. There is a much lower risk to making a weird short film than a weird feature film, and the medium should in theory encourage young risk-takers. But while this is certainly an accurate sentiment as far as animation goes, I wonder more and more if it is a false narrative for live-action shorts. The more I watch, the more I see filmmakers simply trying to create skillful homages to their favorite features. I guess the thinking goes that if their work looks familiar enough, then the risk-averse powers that be, will allow them to make a familiar-looking feature.

I’m not a horror fan by any stretch so I can’t say with authority that Bobby Miller’s TUB breaks new ground, but to this jaundiced eye it certainly feels fresh. My own creativity in writing skews heavily to acts of combination: conceiving of familiar elements and mashing them up in ways that don’t belong, and that is TUB in a nutshell—

a sober relationship drama combined with British-style awkward comedy, held together by an outrageous bit of body-horror. It’s a Frankenstein-monster of a film and naturally I love it.

The tag-line accurately sums up the premise but it is does not adequately reflect where the film goes. In keeping with its jumbled influences, the film provokes a wide variety of reactions: outrage, disgust, laughs and even tenderness. At times Miller, like any good horror director, will stretch out the tension like a rubber-band. At other times, he’ll lay all the cards down and ask you to simply laugh at the absurdity. Cohesiveness naturally is the film’s greatest failing, as the script loses grasp of the character arc about 2/3rds of the way through. Plot, rather than development, propels the film to its finale, but some of the best short’s are glorious messes in their own way, and if the trade-off is between this lack of cohesiveness and the brio Miller shows in jamming these disparate elements together, I’ll take the latter every time.

Bobby Miller might be a familiar name to many of you who are online short film fans. The Columbia film-school grad was the man behind The Best Short Films in the World, an inspired, Webby-winning web series for the Indy Mogul online network. Each week Miller would host and do the very SotW work of curating great short films from the internet. The picks were pretty good, but Bobby had the added foresight and skill to make himself a loveable character in the process, something I have, as of yet, failed to accomplish =P. Another Indy Mogul show followed, as of course did TUB. The response to the film was quite impressive, it earned a debut at Sundance 2010, and played SXSW that year as well, where our man MarBelle was able to snag a few minutes with Miller. For a long time the film was only available through an exclusive self-distributed DVD, but is now online for general enjoyment. If you love the film though, the DVD is still available with over 50 minutes of behind-the-scenes and making-of footage. Still waiting on my copy, I’m hoping there is a great peek into the making of the incredible “TUB-baby” on it!

If you want to catch Miller’s next work, he has a new web series for YouTube superstar, Fred debuting Sept. 22.. Given Miller’s track record with web series, this should be a fun one, and hopefully he remembered to bring some of his talent for genre-bending and general weirdness—qualities on ample display in TUB—to bear on this new project.