When animator Andrea Dorfman falls for a plastic surgeon, she must confront her own hang ups regarding her appearance in this sweet, but powerful film-confession. (U.S. Audiences Only)
READ REVIEW
Next Previous 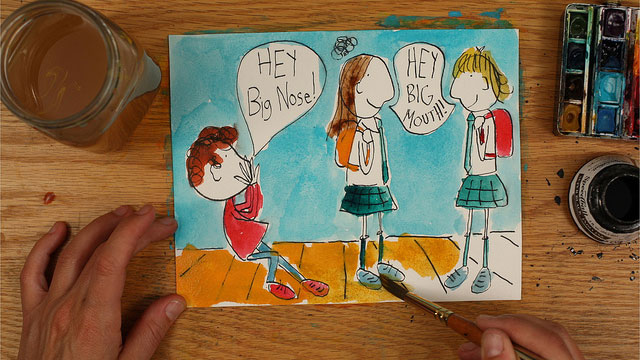 Flawed is an impressive animated work from Canadian artist Andrea Dorfman; a work that is at once twee but serious, heart-warming yet heart-breaking, in which she examines the conflicted feelings that arise when she strikes up a romance with a plastic surgeon. Through an intensely confessional narrative, she discovers that secret to getting the boy to accept her is to learn to accept herself.

The film has been a hit on the festival circuit for a couple of years, winning at Palm Springs and playing HotDocs and SilverDocs. It has been one of the recent jewels of the NFB‘s impressive animation catalog and I have been eagerly awaiting its arrival on the web. That time has now arrived, as it, along with 5 other great docs, are online through the PBS POV Docs website.

The film’s style is unique, something immediately apparent in the image above. This animation is not an animation per se, it is in fact a stop-motion of Dorfman creating static compositions in ink and water-color that visualize the narrative she relates through voice-over. It is neat, and moreover a perfect match for its subject matter. The childish watercolors evoke the childhood from whence Dorfman’s concerns about appearance first materialize, as well provide a neat parallel to the postcards through which she and the plastic surgeon first courted each other.

The film is intensely personal, and so the inclusion of Dorfman (or at least her hands) in the piece is likewise fitting. We’ve seen a lot of films show the animator in the work, Hertzfeldt for example, or perhaps most famously Chuck Jones’ in Duck Amuck, and while she is not torturing her creations like those two do, neither is Dorfman’s use of this technique gratuitous. The entirety of the film is explaining her history and her mental space, so the subjectivity of her inclusion in the piece is a very nice match for the personal, confessional tone of the film.

These personal and subjective elements thus succeed both thematically and aesthetically, allowing her to tackle an important topic, female body image, in the most satisfying way possiblenot through a self-righteous screed, but by relating to it personally and sharing that journey of self-discovery with us. That is what makes Flawed not only cute and sweet, but ultimately important, and one of my favorite recent short films.

Edit 8/24 7pm PST: I’ve confirmed with the Exec Producer of POV that the film rights are for the USA only and thus geo-blocked for International audiences. My apologies.