Visual artist Max Hattler transitions from the digital to the practical in this amazing stop-motion piece which traces the history of 20th century art and design.
READ REVIEW
Next Previous 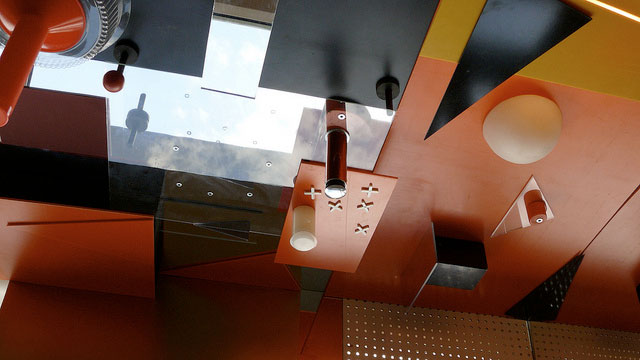 A strange world where experience, both familiar and unfamiliar, is cut-up, upside-down and otherwise displaced, as modernist shapes move and construct themselves in almost organic ways. AANAATT, a 2008 music video from artist Max Hattler is a sublime stop-motion animation that hearkens back to 40’s and 50’s abstract films through its geneological exploration of shape and movement with music.

The music is a track from Japanese artist Jemapur In 2008 W+K Tokyo Lab commissioned 4 music videos for the then 21 year old music producer, and I imagine that this was the strangest. Using a static camera and zero digital effects, Hattler, whose previously celebrated films like Collision are definitely digital, adeptly moves into the arena of object stop-motion. In doing so he creates something as intricate and imaginative as I’ve seen in stop-motion’s modern renaissance. In the last year only the work of the Mixtape Club comes to mind that combines both AANAATT’s level of world immersion with an abstract intent.

The move to practical animation is not simply about method, but fits into the film’s story. I see Hattler’s compositions and materials tracing aspects of modernist art and industrial design through time, engaging with period styles, so refraining from digital effects helps the film stay true to those influences.

The film has toured the world for a long while, and this release has been long awaited. SotW-writer MarBelle discussed the film with Max Hattler way back in 2009. It’s here now though, have a look.