Experience the weird but hilarious disconnect of a group of advertisers saying exactly what they're feeling in this vintage internet classic.
READ REVIEW
Next Previous 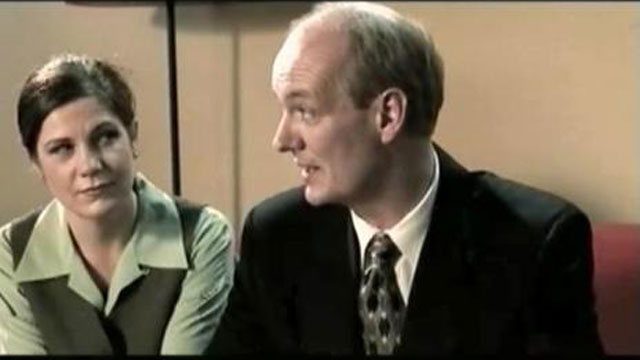 Feeling a small lull in the onrush of new videos from Vimeo gives me a chance to use the way-back machine and pluck out a favorite from yesteryear. Internet short film is a remarkable genre, being 10 years old does not qualify as vintage in most any other category, but it is the case on the web, and is the case with Truth in Advertising, a 2001 hit that charted a rare path from Cannes competition film to early web video pioneer, and along the way became an enduring classic amongst frustrated workers of a whole industry.

Truth in Advertising works with a simple, and subsequently oft-repeated premise of having its characters say what they actually mean. Pretense is maintained in tone and body language, but a disdainful inner monologue is vocalized. Basically, they all behave the opposite of anyone I meet at a party, where unfailingly polite small talk fails to mask bored, slumped shoulders and flat, affectless remarks. Should work on my bon mots I guess!

Writer/director Tim Hamilton chooses to place these truth-tellers in a workplace, a perfect location to explore the disjunction between thoughts and speechwhere else does propriety overrule instinct quite so dramatically? Even better than perfect is the decision to make that workplace an advertising agency, and populate it with smarmy, false, ego-driven kiss-asses and let them go to town on each other via bouts of petty, dismissive and back-stabbing wordplay. The result is a dark and insightful satire of the complex dynamics of a workplace, that, while not guffaw-inducing, is keenly perceptive and clever.

The film is a bit long at 12 minutes, but its scenes are presented as chapters, allowing it to be split up into smaller, 3 minute portions. This is how I first saw the film years ago, in disconnected chunks back in the wild days of user-generated video. It was a clever ploy too, partly necessitated by slow internet connections and crappy streaming codecs, but also visionary in anticipating serialized web series. Whether that was the intent of Mr. Hamilton or an early case of piracy I do not know. After playing Cannes a DVD was briefly sold ($29!!) but the film really gained life in an old-fashioned, viral way. While clearly a spoof of advertising types, the industry did not take offense, but instead took to the film passionately. Small, barely watchable quicktimes were passed around through email, and the majority of the comments left on video pages were of the “OMG this is so TRUE!!” variety. In 2006 YouTube was born, and Truth became one of the earliest scripted hits there. To this day, get yourself into a room full of advertisers and and chances are you can all laugh about this film.

Tim Hamilton was able to parlay his short film success into a feature film gig a few years later, directing an extremely impressive cast in the 2007 Warner Bros. comedy Mama’s Boy. Unfortunately the film didn’t seem to be as impressive, scoring an abysmal 8% Tomato-reading and failing to receive a US theatrical release. Worldwide receipts of $688,000 on a estimated 15 million budget are body blows to a career, and Tim Hamilton went back to short film with 2008’s The Catsitter. Here’s hoping we see a feature film comeback from Tim in short order.