What if a Deaf man became an internationally famous adult film star, all because he's very very good with his hands?
READ REVIEW
Next Previous 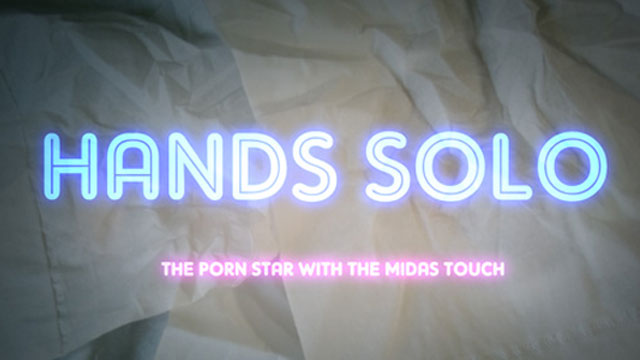 Films about disability are heavy. They are two-hanky films that, even though they end with uplift, get there on the back of grueling explorations of lonliness, alienation, and misunderstanding. As a “normal” audience we end up “enriched” through these empathetic lessons in compassion, mimicking the supporting characters’ journey from prejudice to acceptance. I never questioned that formula before, but I bet director William Mager and screenwriter Charlie Swinbourne have, because they’ve made a film featuring a deaf protagonist that delightfully upends all those expectations.

While deafness is very much present in Hands Solo—our protagonist and his lady love both utilize sign language to communicate their dialogue—what is uniquely enjoyable about the film is that the highlighting of disability comprises a relatively small portion of its allure. While notable for its inclusion, if absent you would still have a rather polished and well-written mockumentary, sporting some irresistibly funny moments. At no point are the character’s interactions with non-deaf characters held up as a “teachable moment”. Whatever education is at work in the film is subtle and unobtrusive by design, attempting to tell a story that is educational simply through observation rather than agenda. Indeed at no point is Hands Solo’s disability really held up as a disability at all— his magic fingers, presumably strengthened by his use of sign language, are his great strength, the skill which allows him to gain fame and fortune.

This allows the film to be judged on its own merits, and it is not found lacking. While rather long at 14 minutes to be operating upon a single joke, Swinbourne’s writing is dextrous in finding variations on said joke, and the production uses the mockumentary approach to its fullest via supplemental animations,  false archival footage and “medical” testimonials. The screenplay is well-structured to allow the extent and range of Solo’s powers to slowly escalate, weaving them into the story naturally until the breathlessly ridiculous climax.

While the porn angle may be distasteful to some, (and disappointingly naive to others), Hands Solo is, at its core, a tender love story. Whatever reservations one might have over the objectification of women (that they’re sexual instruments capable of being played) is disarmed by the film’s sweet innocence. It is of course a power-fantasy, but one not so different than a superhero story or your average episode of Entourage, and, to a disabled community that is used to melodramatic depictions of struggle, the average-guy deaf guy making good and getting the girl has to be a pleasant change of pace. To the rest of us, it is just darned touching and funny.

William Mager is a veteran of the UK film industry, getting his start in 2000 as a BBC new media trainee. He continues to work in several capacities for the BBC, but since 2003 has moved into the film arena and now has a number of festival shorts under his belt, including another Swinbourne collaboration in My Song, and a Virgin Media Shorts entry Deaf Mugger. You can find out more about Mager at his website, or follow him through Twitter. Tomorrow we’ll be posting a brief Q&A with him as well, so look out for that, and, for those who prefer it, the film is also available with French subtitles.