A dark take on chidlren's Tv classics, London's "This Is It Collective" try and teach us how to be creative.
READ REVIEW
Next Previous 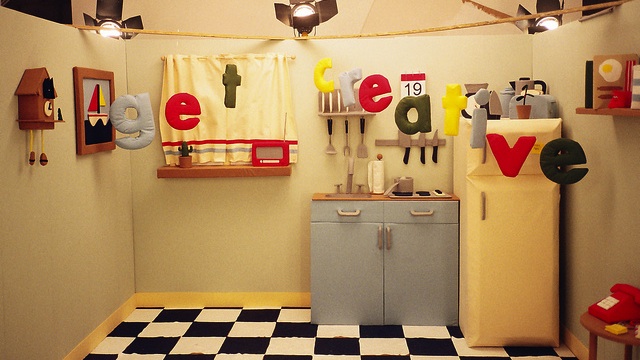 Jason Sondhi
Children’s programming is so idiosyncratic and ripe for parody that it is amazing more people don’t try to play with it. Even if they did however, its hard to see them topping This Is It’s entry into the subgenre. Don’t Hug Me I’m Scared, is a mixed-media masterpiece, blending costumes, stop-mo and 3D animation into a harrowing journey into “creativity”. The first half plays the concept fairly straight. It’s only when our teacher, a talking notepad starts striking down the ideas of her pupils, that you are keyed into the idea that something might not be right here. In the process we’re treated to the closest thing to a catchphrase as online film will get this year—”Green is not a creative color”. Things get darker from there, but at only 3min, I might as well just let you watch the film. So go ahead check it out!
Vimeo This is It Collective
LIKE TWEET