Metachaos is a multi-disciplinary project from accomplished, ambitious, Italian artist Alessandro Bavari, which includes a photo-set, mixed-method paintings and this short film, an 8min assault on the senses
READ REVIEW
Next Previous 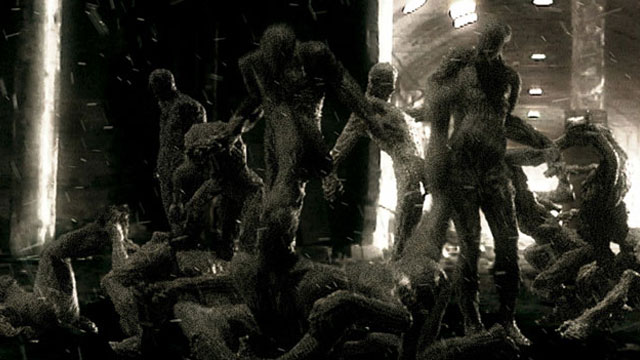 I am generally very picky about featuring artistic postproduction work—too often museum-style digital pieces rely on liberal doses of audience-supplied interpretation to lend their loose, unfocused and visually mundane visions with meaning and power. Metachaos does not suffer from those complaints, as it is above all an arresting experience—hyperkinetic like a music video, it rapidly attacks the audience with indelible, alternating images of chaos and stasis. With its thumping, experimental soundtrack and strong elements of body-horror, the short film strongly reminds this reviewer of Chris Cunningham’s influential collaborations with Aphex Twin. Also, rivaling the film’s aesthetics, is Bavari’s ability to (somewhat pretentiously) articulate his inspiration. Take this synopsis from the film page’s lengthy notes:

Metachaos, from Greek Meta (beyond) and Chaos (the abyss where the eternally-formless state of the universe hides), indicates a primordial shape of ameba, which lacks in precise morphology, and it is characterized by mutation and mitosis. In fact the bodies represented in METACHAOS, even though they are characterized by an apparently anthropomorphous appearance, in reality they are without identity and conscience. They exist confined in a spaceless and timeless state, an hostile and decadent hyperuranium where a fortress, in perpetual movement, dominates the landscape in defense of a supercelestial, harmonic but fragile parallel dimension. In its destructive instinct of violating the dimensional limbo, the mutant horde penetrates the intimacy of the fortress, laying siege like a virus. Similar to the balance of a philological continuum in human species, bringing the status of things back to the primordial broth.

Almost too much exposition no? I thought the key to being an artist was cultivating a sense of mystery surrounding oneself and one’s work =). Bavari’s forthrightness has not prevented the film from noted honors, including the Golden Nico Award at the 2011 Prix Ars Electronica Festival, though, with only 3000 views after 6 months online, internet success has so far eluded this stunning effort.  For more info on Bavari’s work, check out his website.