A creator's puppets must struggle to carry on after their master is gone. A bizarrely moving animation from Supinfocom students.
READ REVIEW
Next Previous 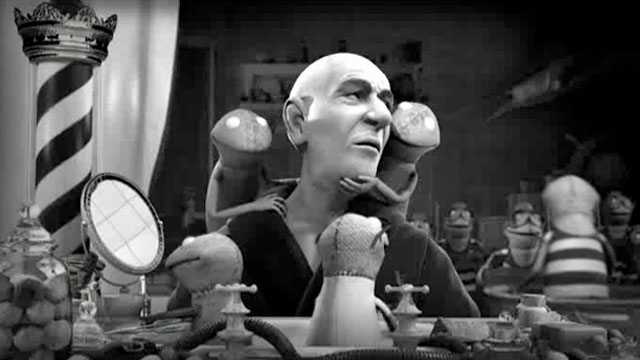 The depth and quality of internet short films is astonishing. People ask me if its tough to find the shorts we feature here on SotW, and I have to answer, “not really”. There is so much out there waiting to be highlighted that good stuff invariably falls into your lap.

Take Over Time, the story of muppet-like puppets who continue on after the death of their master. The film is simply phenomenal; accomplished CG is used to animate, but a B&W palette and a powerful score are what lend its finest scenes a haunting, operatic grandeur. I knew nothing about it till this morning when DirectorsNotes happened to tweet about it. I watched, I loved.

The thing is the film did not come out of nowhere—it has all these connections that, in theory, should have brought me to it sooner: the directing team of Oury Atlan, Thibaut Berland and Damien Ferrie made the film in 2004 at our beloved French school Supinfocom, our good friend DeK was hip to it way back in 2006, the short was part of the Saatchi and Saatchi New Director Showcase in 2005 (like the recent and amazing We Miss You), and the film screened theatrically alongside many SotW favorites as part of the 3rd year program of “The Animation Show” (man, we’ve featured a lot of Animation Show selections!).

Its not even that the film was unavailable. Saatchi and Saatchi put up a nice YouTube version in 2009, and the film could be seen online at DailyMotion or Myspace since 2006. Views have been decent, probably 30k-40k across all platforms, but never has it gotten serious traction. Now that tastemakers are discovering it on Vimeo though, perhaps that will change.

So I know you didn’t ask, but no, it’s not that tough to seek out great shorts for this website. When I get tired of the newest, biggest, brightest short films coming down the pipeline, either online or at fests, I’m comforted knowing that there are years and years of great short films lying by the wayside, forgotten, waiting to be rediscovered.