When activated, the "plot device" spontaneously transforms our hero's world into any number of cliched film scenarios. A hit branded film for software company Red Giant.
READ REVIEW
Next Previous 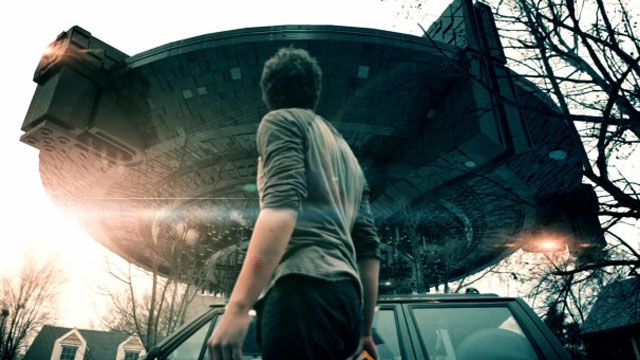 Did you see this one yet? 400k others have, making it one of the more successful online short films of the year. The attention is not unwarranted, Plot Device is a pretty good yarn, a 9min live-action film whose gimmick is jumping between genres via the titular “plot device”, an item our main character orders on Amazon which, when activated, spontaneously transforms his world into any number of cliched film scenarios.

The action and special fx are impressive, though the acting from the main character played by Ben Worley (presumably the brother of director Seth Worley), and the one-liners written for him, are a little wooden. Despite that, the film moves at an entertaining pace, not dissimilar to a summer action movie, and equally breezy. What is more fun than the sheer entertaining style of the film however is recognizing the perfection of its concept and execution in connection to its aims. The film is branded content, brought to us by the small film-tools software company Red Giant. Red Giant’s centerpiece product is Magic Bullet, a basic video coloring program whose advantages over more robust competitors like Apple’s Color or Adobe’s After Effects are its ease of use and its many film and tv-style presets.

Not only is the film entertaining in its own right, gaining exposure for the brand and developing a positive brand image, the film is a wonderful product demonstration. You see, each genre that our wayward protagonist skips into is defined by its own unique look, achieved through the use of Magic Bullet. The film is an image-enhancing, creative, unadulterated love-letter to film, but is also as basic and utilitarian as your run-of-the-mill Sunday morning infomercial. The combination of these two distinct approaches, as well as the phenomenal exposure the film has received within its precise target audience, leads me to think this might be the most effective branded content on the internet right now.