In the quiet of the forest, Firebugs secretly amass for worship only to fall victim to a foe pulling the strings in this realistic CG film from Germany.
READ REVIEW
Next Previous 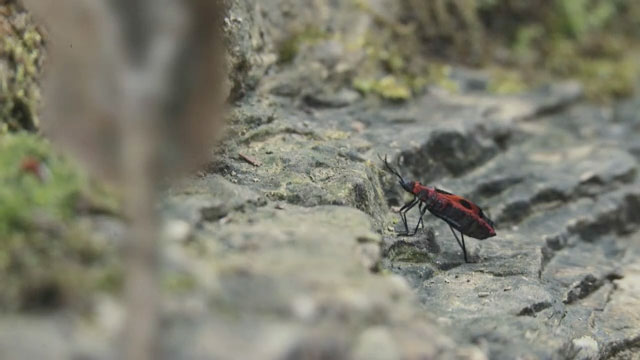 The history of insects in film can be traced back a long way, from the cute cartoon pests in early animations like The Lady in Red and Mr Bug goes to Town, the human/creepy-crawly mutation in legendary 50’s horror film The Fly and even the 60’s Japanese super-bug Mothra. In more recent times though, films have reverted to the lovable animated critters found in the likes of DreamWork’s Antz and Pixar’s A Bug’s Life. Although still in the same field of the afore-mentioned films, Fabian Grodde’s insect-filled animation Crossover feels miles apart from its modern day companion pieces, with its über-real aesthetics and tribal plot lending it a darker, moodier edge.

When creating a short about the intricate world of insects, an attention to detail is a must if the film is going to work in terms of believability and involvement. With Crossover, Fabian Grodde has managed to create a world that we can believe in and engage with, by inhabiting an “elaborately designed miniature setting of a forest” with tribes of immaculately designed CGI insects.

In fact, when it comes to attention to detail, you won’t comes across many better examples than Crossover. The landscapes Grodde and his team have created for his CGI bugs to inhabit manage to feel grand in scale, despite their restricted size. It is a sense of grandeur that is only multiplied by the cinematography as director of photography Raphael Köhler’s camera sweeps and circles the scenery in a Lord of the Rings fashion. The meticulous detailing isn’t restricted to the film’s surroundings though, as Grodde’s bugs scuttle and crawl across the frame with a realism that sends shivers down your spine.

Crossover’s powerful imagery is perfectly matched with a fascinating narrative that pays homage to the cinematic great King Kong, whilst also managing to comment on the reach of Christianity across the globe. It’s a combination that results in an enthralling amalgamation of style and story, presenting us with a film that is truly rich in originality and unlike anything I’ve ever seen before.