Enter the world of Chinese wedding photography through the work of 80 Impression, an amazingly creative and popular duo of artists.
READ REVIEW
Next Previous 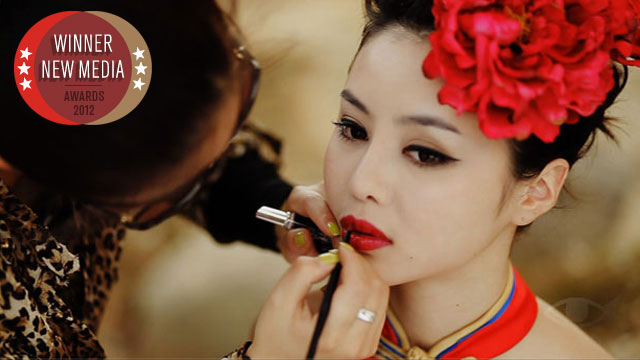 Short documentaries have increasingly come to mean “profiles of interesting people doing interesting things”. If you like that, then you’ll have no problem with this new 7min branded film from Intel as part of their “Visual Life” series. Pointing its camera at influential bloggers that are creating visual culture, Intel hit it big with its first entry, the immensely popular documentary on fashion blogger/photographer The Sartorialist. This is the fourth doc from them and heretofore it has been criminally underexposed, with less than 1/100th of the views of the Sartorialist film.

In Kitty & Lala we are introduced to a team whose photo blog for their wedding company, 80 Impression, is one of the most visited in China. The pair are creative, driven, but playful, and have shook the wedding photo biz in China out of its staid traditionalism, introducing location shooting and fanciful costumes, blending the commercial and artistic. In doing so they have been become icons of strange sort in China, evangelists for individuality, expressiveness and modernity, representing a younger generation of Chinese for whom such values are of increasing import.

As with a lot of advertising, there are many cooks in the kitchen. Amsterdam Worldwide is behind the campaign, Sun Media of China was the go between, local production company The Bag Ladies made the piece, and Australian Qiao Li directed. All I know is its one of the rare short documentaries where the work behind the camera and that of the people in front were of equal style. This is a great looking film, edited well, with awesome music, telling the story of two creative folks who take gorgeous pictures of pretty people. What’s not to like? It’s worth the eventual tie-in to Intel Core Processors. More please.